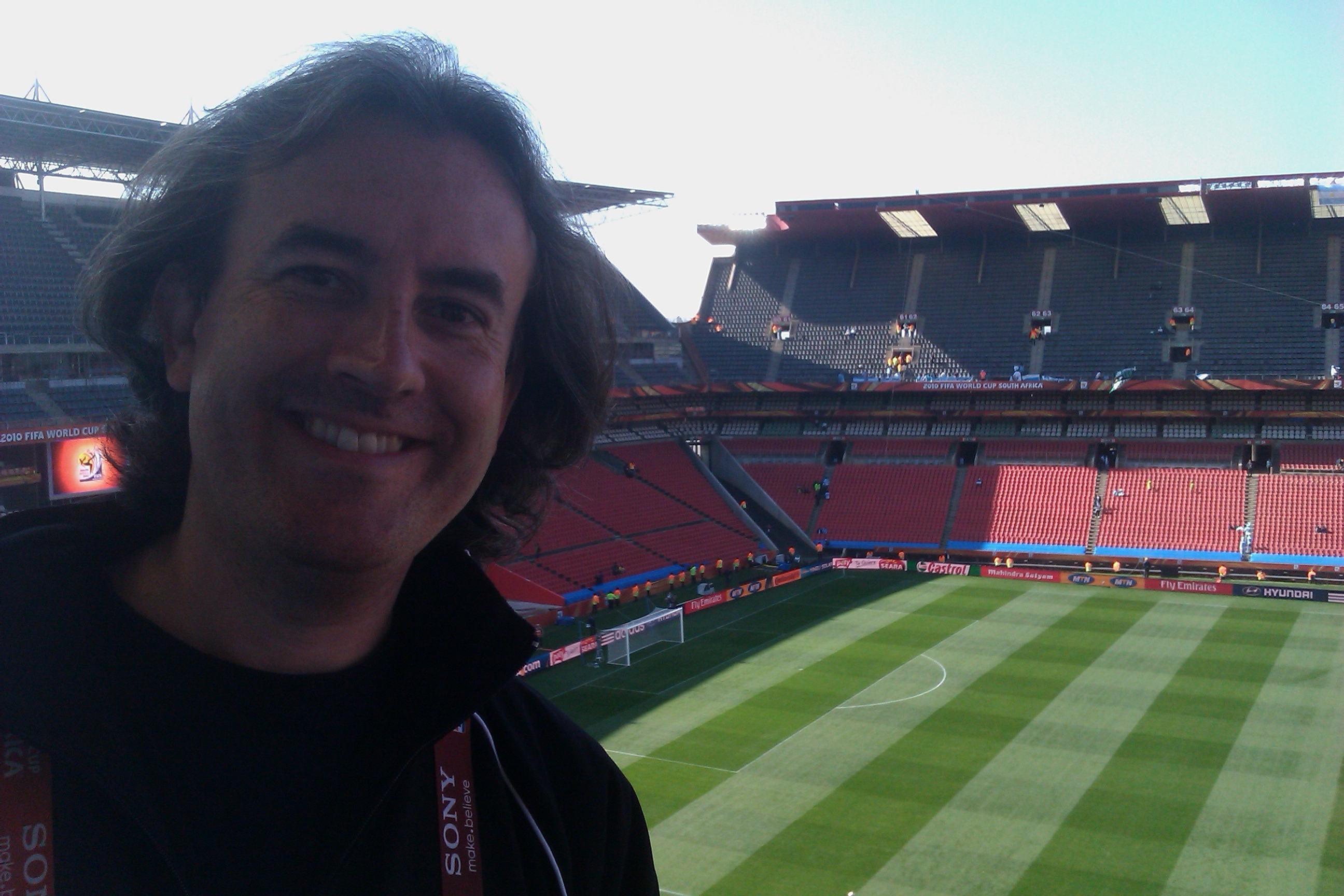 I bloody love Skype I do. How can it be that I can chat to my wife and kids through a webcam for nothing, not have to shout to make myself heard and understand everything that's said to me? Forget pausing live TV - this is the future, I'm telling you! Makes it much easier to be a long way from home when you can almost BE home when talking to the fam.

My first two commentaries are done and dusted for talkSPORT here - the less said about France 0-0 Uruguay the better, but today in Ellis Park it was a total delight to sit alongside Mickey Quinn, Adrian Durham and our producer Ant to call the Argentina/Nigeria game. Such an open match, and Messi was at his imperious best wriggling through challenges like a salmon trying to escape the grizzly bear's jaws as it leaps upstream. That said, Nigeria's goalkeeper had something of a worldy keeping him out several times with terrific saves. Can't see Argentina winning the whole thing - dodgy defending at times for me, but they have the win they needed.

We had such a great commentary spot too - right on halfway in a box just in front of BBC1's guys. talkSPORT once covered a World Cup 'unofficially' by commentating on games from hotel rooms as they didn't have rights to be in the stadiums or official broadcast centres. That was yonks ago, and yet there are some who think we STILL use hotel rooms. Well we do, but only to sleep in. It's great to have official coverage from South Africa and give the UK radio audience a real choice of listening for this tournament.

Maradona was as wonderfully mad as a fish pre-match, smiling and blowing kisses at all and sundry in the stands and hugging Nigeria's Kanu with great affection as the players emerged to have a look around. Hard to say who's the oldest out of those two.

It got rather parky in the stadium towards the end of the game and I almost regretted not opting for the thermals socks I'd packed, but not long after the final whistle had blown on Argentina's win, our Mansell-esque driver Sydney had arrived to weave us through the traffic at alarming speed back towards Sandton and 'home'. I'm fast learning that driving in this country is not for the faint hearted.

We've encountered nothing but friendliness and great humour in our first few days in South Africa. It is clearly still a country of quite disgusting contrasts when you drive through a city like Joburg, and I'm assured that the same rich/poor black/white divide is just as much in evidence in Pretoria, Durban, Port Elizabeth...you name it. It's going to take a good few generations before some of the bitterness starts to reside on both sides and the government can effect real change.

The talkSPORT team got back to our lodge in time to see England's predictable draw with USA on the TV. This place we're staying in is just too nice. 3 square meals a day, peace & tranquility, a roaring log fire...and I don't have to share rooms with the Moose! I do have lots of homework to be getting on with, though - namely sorting out player profiles for my next game between Algeria & Slovenia who meet tomorrow in Polokwane.

At least I don't have any North or South Korea games to cover.

Where is Page 2? Has it been kidnapped? I'll start a collection for the [Ray] ransom.

Greece shiould be banned from international football. They are crap and have crap names. I'm giving up kebabs in protest.