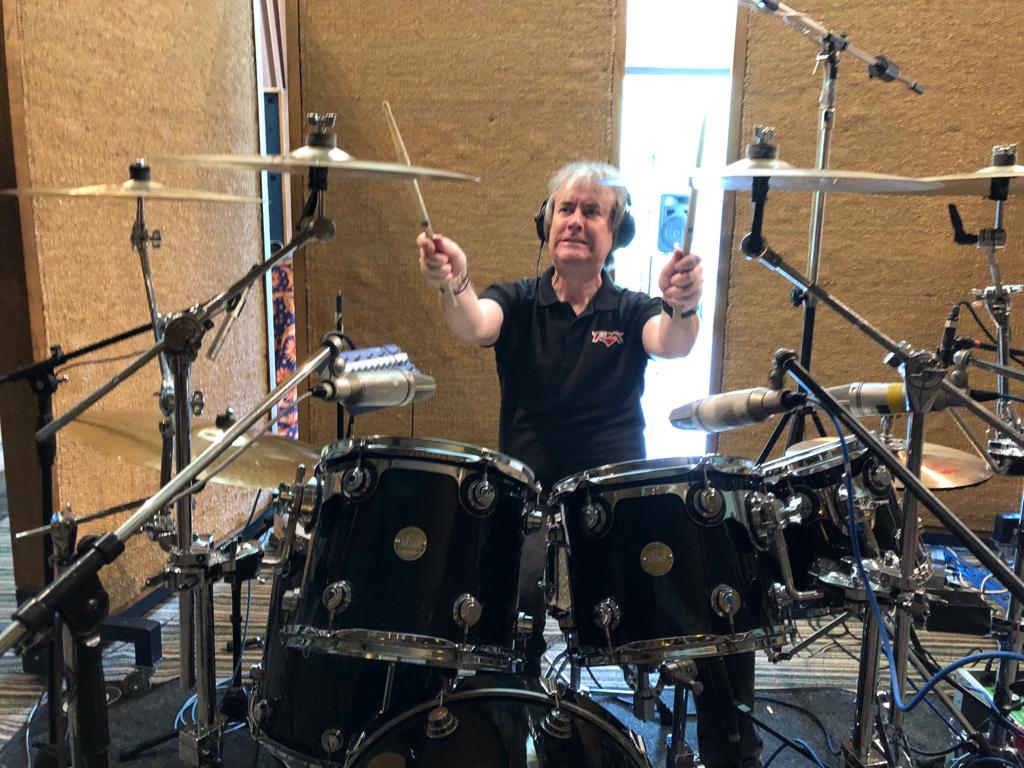 As I type in late-September, work is well underway on creating my 3rd solo album to follow on from 2013’s ‘Prove You Wrong’ and 2015’s ‘Second Time Around’. I’ve mentioned before that the follow up to my debut wasn’t in the plans originally, so to be toiling away on yet another collection of songs is way off my original radar.

Ideas still come to me when I least expect them, whether they be riffs, song titles or basic lyrics that can set me on my way. I have no set way of writing as I’ve found over the years - not that that’s frustrating at all…it’s just how things are. A song like ‘We Believed’ originated from one single line of lyrics, whilst ‘Stronger Than That’ began life from a simple chord progression, but sometimes a song has come together with outside assistance, sometimes starting with the phrase:

“I’ve got this riff idea, mate, I don’t know what you can do with it…”

Many’s the time I heard that opening gambit in the Shotgun Wedding rehearsal space underneath Spaghetti Junction from the long-haired guitarist stood directly opposite my drums with his Hot Pink Fender HM Strat poised to deliver a flurry of notes. And more often than not, that ensuing flurry was very pleasant to the ear.

I’ve known Graham Ettrick for over 30 years now, as a bandmate and a pal, and in those 3 decades I do not think that we’ve ever exchanged a cross word once. Our tolerance levels for one another remain disgustingly high to this day, and even though it’s 25 years since we were in a band together, Gray has always periodically sent me riff ideas that have popped into his head, sometimes apropos nothing.

Shotgun Wedding was Gray’s band, really, along with bassist and co-founder Paul Glover - anyone that came and went (including me) during the 7 years of the bands’ existence were merely part of a benevolent dictatorship led by those 2 guys. And when Paul left in late 1991, Gray became defacto leader - at least to my mind he did. I mean, yes I did write most of the band’s songs once I’d settled into life with Shotgun by late 1988, but Gray and I collaborated more than any other partnership within the band and I relished his regular involvement.

Gray wasn’t quite so much a songwriter as a riff writer. There were times when he put several of his own ideas into a full and coherent song structure - one such tune called “Crushed” impressed us all so much, it became the title of our final demo tape and was the live set opener for the last year of our time together as a 5-piece. But most of the time, he just had these snatches of guitar work that he either couldn’t stitch together or just liked the sound of on their own. My job was to try and knit his noodlings in with my own to create songs for the band - and that was a really fun part of the creative process.

I can vividly remember sitting with him one day in 1992 in his house on St Andrew’s Road near the Blues ground as he played me a verse and bridge riff that he’d just worked out and was very fond of - could I, he asked, put a melody on top of that and maybe find a chorus idea to go after it? Within 20 minutes of back and forth between us, ‘One Over The Eight’ was born, and that song is one of a good few tracks on my upcoming album with the old Danter/Ettrick teamwork - some ideas stem from those good old days, but some are from bang up to date.

Gray has a whole stash of ideas that he still comes up with and records - and when I popped in to see him at his place last year sometime, he played me his latest batch of riffs and chord progressions. Not every one hit home with me, but plenty did, sparking off ideas in my head as to how a Gray riff could link into one of my burgeoning, unfinished ideas. There’s at least 4 songs on this next album that fall into this category.

Other co-writes we’ve been working on were completed years ago and demoed by Shotgun Wedding. Hurriedly. That’s the thing with demos - time is money, especially if you’re a young band long on ideas but short on cash. In Shotgun’s case, our ambition typically led us to try and record/mix 4 songs in 2 days of studio time. You were at the mercy of the studio engineer, with whom you had little or no relationship prior to recording time. That makes it hard for all concerned to create something unified and focused. Sometimes, the ticking clock means that one or two band members have to ‘make do’ with their recorded parts as there simply isn’t time to correct slight errors or missing bits within the meagre budget allowed.

Shotgun Wedding fell into this financial trap several times in our demoing history during the late 80’s & early 90’s, leading to final mixes that at best were ‘ok’ but were often short of what we wanted to represent us. That was, to Gray & I at least, to the detriment of songs we’d written that deserved better. Several of these tunes are getting a whole load more TLC to appear on this next album of mine, albeit with a fresh lick of paint here and there with regard to arrangements lyrics etc.

Gray & I have often joked about how much easier it is today to create music at home compared to our youth. Home recording 30 years ago was based around cassette-based multitrack recording units that never provided results anywhere near satisfactory or of the quality required to catch an A&R man’s ear.

You can record drums at home these days, of course, utilising drum machines or electronic kits that replicate acoustic sounds closer than ever, but in my opinion when it comes to Rock music, there is no substitute for recording drums in a studio properly mic’d up. So that’s what I did.

In order to do that, I took a step back in time to a studio where I recorded a demo where the clock wasn’t being watched as much as it had to be in Shotgun days. 25 years ago, I spent a glorious day recording at Monnow Valley studios in Monmouth, South Wales with the band City Kidds who I subsequently joined some weeks later. The live room was cavernous and perfect for capturing big bombastic drum sounds.

I simply had to return to that space once I knew I’d got songs together for this latest project, and it was in some ways incredibly heartening to discover that Monnow Valley has barely changed in a quarter of a century. The live room remains as spacious and warm-sounding, and the Neve console in the control room is precisely the sort of desk to get those of us who follow the Dave Grohl school of “Ludditeism” very very wistful and excited indeed. Admittedly some things have moved on - the huge tape machines have disappeared to be replaced by computers and Pro Tools software, but a hand built valve desk is a hand built valve desk, and the compression you can obtain through the delightful outboard gear they also have there makes for the sorts of basic drum sounds that form a proper basis for a Rock album.

Much as with the recording process I undertook with Alex Cooper on the first two albums, I soon found myself ahead of schedule in a very pleasing way. Whilst the old demo process I mentioned earlier saw the clock ticking and thus performances somewhat compromised, I knew that I could get drum tracks done for all 10 songs within the 2 days I’d booked in Monmouth. You can sometimes go too far the other way if you’re not clock watching so much in a studio, and spend too long over a part which ends up with you losing the spirit and energy you were looking for - especially when recording drums.

But, having set up, tuned and mic’d up my kit by late morning on Day 1, it really wasn’t my intention to have all 10 drum tracks captured just 7 hours later. However, that’s exactly what happened as the comfortable, inspiring surroundings aided and abetted my playing to the extent that I was rattling through the tunes. “Fail to prepare, prepare to fail” is the phrase here...I KNOW my drum parts - not perhaps to the extent that Neil Peart micro-manages every fill and every flam to the nth degree, but I’m prepared enough to know what to do at every point for the benefit of the song in each track’s arrangement.

Further diligence came from the Monnow Valley team assigned to me in engineer Callum and his assistant Edie, who provided just the right amount of expertise, encouragement and cups of tea with biscuits to help the process along splendidly. And thanks to them and my ‘arrangement brain’ not letting me down, I quickly knew that Day 2 of 2 could be spent laying down bass guitar parts that I had convinced myself I would be recording later at home.

Those bass parts went into the super computer just as swiftly that next day to lock in with the accents of the drums from the previous day, and I even had time before the session ended to utilise the gorgeous grand piano in the live room to add a part to the one slow song of mine on the album entitled ‘Landscapes’.

And so the rhythm section building blocks are all in place - that means I’m currently spending what spare time I have in and around my work and personal life adding guitar parts at home to those backing tracks with every intention of completing the recording of everything (including my vocals) by the end of the year. No clock watching required now in terms of budget...merely in terms of not impinging on anything else in my life to its detriment. That said, my tastes and needs for guitar parts are pretty straightforward; meaty, Classic Rock rhythm parts...and solos? Well I think I’ll hand some solos over to friends to play, as my lead work is still something I come up short on in my opinion.

And the first person I called about playing a solo? Graham Ettrick. It wouldn’t be right were he not involved in this 3rd album, such is his influence with the terrific riffs we’ve stitched together between us over the years. I wonder if he still owns that Hot Pink Fender HM Strat...??