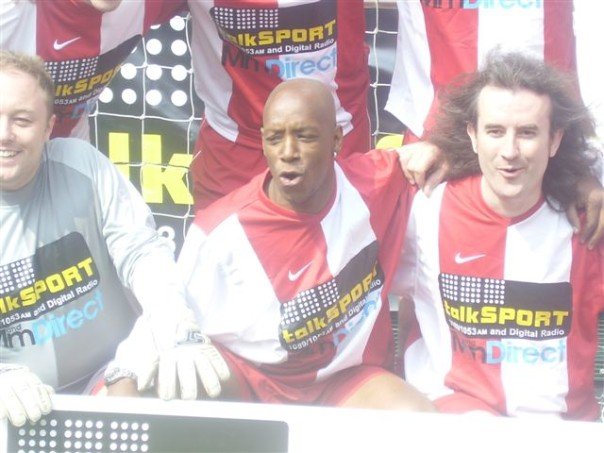 It’s been 20 years since talkSPORT moved offices from Oxford Street to Hatfields just south of the river Thames, largely due to a need to save money at the time, and find somewhere cheaper to run their operation outside the West End. Now as I type, talkSPORT have found more than a chunk of extra cash down the back of the metaphorical sofa and are on air for the first day from our incredibly opulent new studios a bit further down the South Bank at London Bridge. It’s a fair few stories closer to the sky too, as we have now taken occupancy of the 17th (and top) floor at the News UK building that sits right next to The Shard and affords the most spectacular views of the city.

That means saying goodbye to an office work environment that I’ve frequented for nearly 15 years, and a place that saw many an attempt to cosmetically change things for the better but never quite saw off the feeling that we were merely sticking lipstick on a pig. The 3-storey building (plus basement) that nestled in between Southwark and Waterloo tube stations was a place that talkSPORT certainly got the maximum out of despite its limitations.

When I first nervously walked into the 2nd floor office of talkSPORT Towers back in 2004, we didn’t own the whole building – Graham Norton’s ‘So Television’ company had the ground floor office (I never once caught sight of Graham himself in there) and the only studios we broadcast from at the time were located on the 2nd floor, with engineering sharing the 1st floor with another company - whose name escapes me – whilst our sales, commercial production and marketing teams were on the 3rd and top floor.

The 2nd floor was always wonderfully chaotic. The rows of tables were always covered in detritus like week-old newspapers, half-drunk cups of coffee that rivalled the newspapers for their age, and sports books/autobiographies strewn randomly from desk to desk, piled up like mini-skyscrapers. If your book was in any of those piles, it was never going to get read, or reviewed – it would sit there amongst its friends, just somewhere else to leave a discarded coffee cup.

The tiny kitchen which existed at that time to the right of the 2nd floor entrance was an environmental disgrace. Many a visiting star guest politely refused a hot drink being made for them in an area where even Rik & Vyvyan from The Young Ones would baulk at the idea of accepting anything prepared in it. This was a direct upshot of a predominantly male office with the majority of those young males having not long left university and with no significant other to teach them basic cleanliness, it seemed.

This hygienically-challenged workspace did mean we had a number of furry squatters take residence over the years. We kept Rentokil in business on our own for two decades, I reckon. Although I cannot blame mice or rat infestations for my lowest point at Hatfields – namely the day I threw up…on air.

This was February 2008, and at that time I was host of the Sunday afternoon Football First show with Alvin Martin & Jason Cundy. The night before, I’d gigged with Dressed To Kill, my KISS tribute band, at one of our favourite haunts – Stourbridge River Rooms. After our sold out 2-hour show, the delighted promoter supplied our dressing with pizzas and we all tucked in hungrily. But something in one of those slices of pepperoni had an effect on me, but an effect I wouldn’t notice until I was driving down the M40 to London for the show the next morning.

Something didn’t feel quite right as I headed south and east, but I put my slight queasiness at that point down to being tired and having had no breakfast – it would soon sort itself out. Only it didn’t – by the time I was in the office and prepping the content of the 4-hour show, I felt worse and worse. But the show must go on, of course…

Alvin, Jason and producer Tom (it was Tom’s first ever shift as a show producer having worked his way up in previous months) asked if I was ok as I was understandably quiet, but I waved it off despite feeling steadily worse and more bilious. We started at midday as always – I think I lasted half an hour.

It was during a somewhat hesitant question to Jason about former Chelsea defender Paul Elliot that I suddenly realised that being violently sick was the only option available to me. Just down to my right from the presenter’s chair was a large plastic dustbin that we used to discard emails and scripts once we’d read them. And so as Jason began his answer, I bent my head down over the bin and, frankly, blew chunks. I blew a load more a few seconds later as Jason manfully did his best to answer without missing a beat, although you couldn’t blame him for almost mixing the words ‘clubs’ and ‘countries’ up to sweary effect whilst watching me doing my best Linda Blair and projectile vomiting not 10 feet away from you.

The next thing I remember is vaguely coming to my senses lying on the floor in ‘trap 1’, one of 4 toilets located in the lobby just outside the 2nd floor entrance. Now, if you think the kitchen was a health hazard, traps 1 & 2 were a breeding ground for Christ knows what. I may have been sick again in that toilet, I can’t remember, but I was soon guided downstairs by some kind soul to our hospitality room (or ‘green room’ as it’s known – apt considering my colouring at that moment) where I lay on the sofa in the foetal position for a couple of hours feeling very sorry for myself.

Meantime, my on-air disaster had led to one or two developments – firstly, Jason and Alvin had to decamp during the commercial break that was hastily fired in the midst of my barfing because the main studio need fumigating! They went into the spare on-air studio just across the office, and Jason ostensibly took over presenting duties. I’ve always told Jason since that I inadvertently launched his presenting career through me suddenly calling out to Huey and Ralph, and the lad’s never looked back to be fair.

That was a low point – but my time at Hatfields is filled with far happier memories than that one moment; hosting a phone in after Birmingham City won the League Cup in 2011 was a particular high point – especially the HUGE cheer and round of applause I got from those assembled in the office when I arrived that night having been taken by courier bike from Wembley to get there in time for a 7pm start! Lot of Spurs fans work at talkSPORT…

There’s been many a time where I was called in the dead of night by producers to come straight to London and cover for an AWOL Alan Brazil on breakfast, and as I’ve maintained before, only Danny Kelly can rival my boast to have covered EVERY timeslot across the talkSPORT schedule, save for Fisherman’s Blues in the early hours of the weekend!!
The 5-a-side pitches directly opposite talkSPORT towers played host to several grudge matches between Breakfast & Drive teams. I was lucky enough to have played in 2 (for Drive as it turned out) winning once as I shared a pitch with extraordinary ex-playing talent like Ian Wright and Ray Houghton, and I also commentated on a 3rd game from the roof of Hatfields that overlooked the pitches from 100ft up! Brilliant fun!

The atmosphere on the 2nd floor was always raucous and very much the ‘law of the jungle’. You had to have your wits about you as the piss-taking was rampant and any sign of weakness in the wake of said ribbing would be exploited to the nth degree. One unnamed member of staff who used to have his desk tucked away in a corner of the office was surreptitiously caught watching porn on his PC one Friday afternoon and he was mercilessly ribbed over that; two presenters took a disagreement in the office into the studio and had an on-air punch up during their Drivetime show as Tony Cascarino took exception to host Patrick Kinghorn’s constant badgering about his private life!

Of course, in recent years, talkSPORT has spread its metaphorical wings with the advent of our International commentary service (talkSPORT Live) and then the launch 3 years ago of talkSPORT 2, talkRADIO and Virgin Radio. Gradually we took over more and more of 18 Hatfields – Graham Norton’s lot disappeared and the ground floor became Virgin’s home. Floor 1 was refitted to accommodate talkSPORT 2 and our expanding digital team, and even the 2nd floor had a bit of a wash and brush up as talkRADIO moved in alongside talkSPORT and the studios had a long-overdue tech upgrade.

But in truth we could always have done with new premises – and now we have them. “Why should it matter to me that you have posh new studios, then?” might be a question thrown our way. Fair enough I guess – it’s only radio after all. Only it isn’t any more - not in this digital, social-media driven age. The new studios are as high-tech as we’ve ever had, allowing shows to be filmed by fixed cameras in the studios as opposed to segments being filmed on a production assistant’s iPhone. Increasingly, posts on Twitter etc have video of the story or headline being discussed, and in the more spacious upgraded surroundings that talkSPORT, talkSPORT 2 and co now find themselves in, these vignettes will look way more professional than has been possible previously.

And ‘Professionalism’ is an important word, here. Others in radio-land (as Rodney Marsh calls it) have long looked down their nose at talkSPORT as the uncouth, loudmouth member of the family and rarely if ever given us any credence. Maybe in the past we were a little rough around the edges, but let’s not forget that we aren’t paid for by the public – instead I’ve noticed us build and build in terms of profile, audience and respect too as our commercial power grew at the same time. Now, we are a major player in live sports rights (which we weren’t when I first arrived in 2004) and attract guests and luminaries of sport to be part of what we do in far greater numbers than before. We’re not ‘Goliath’ quite yet, but we’re no longer the ‘David’ we used to be portrayed as by those who thought we were somehow transient or insignificant – our recent awards for live cricket coverage are testament to that growth in not only our coverage, but also our ability to deliver the quality required of an increased portfolio of live sport.

Here’s to the next 20 years, then, of cleaner toilets, cleaner desks, Alan Brazil mentioning the ‘beautiful views over the Thames’ in every single link on Breakfast…and more wonderful characters and personalities that make the talkSPORT network what it is - fun… but fun with a purpose i.e. to keep proving people wrong.

Good idea for a song, that…

P.S. talkSPORT's move has gone seemingly without a hitch...I should have used THEIR estate agents last year then!!!!!