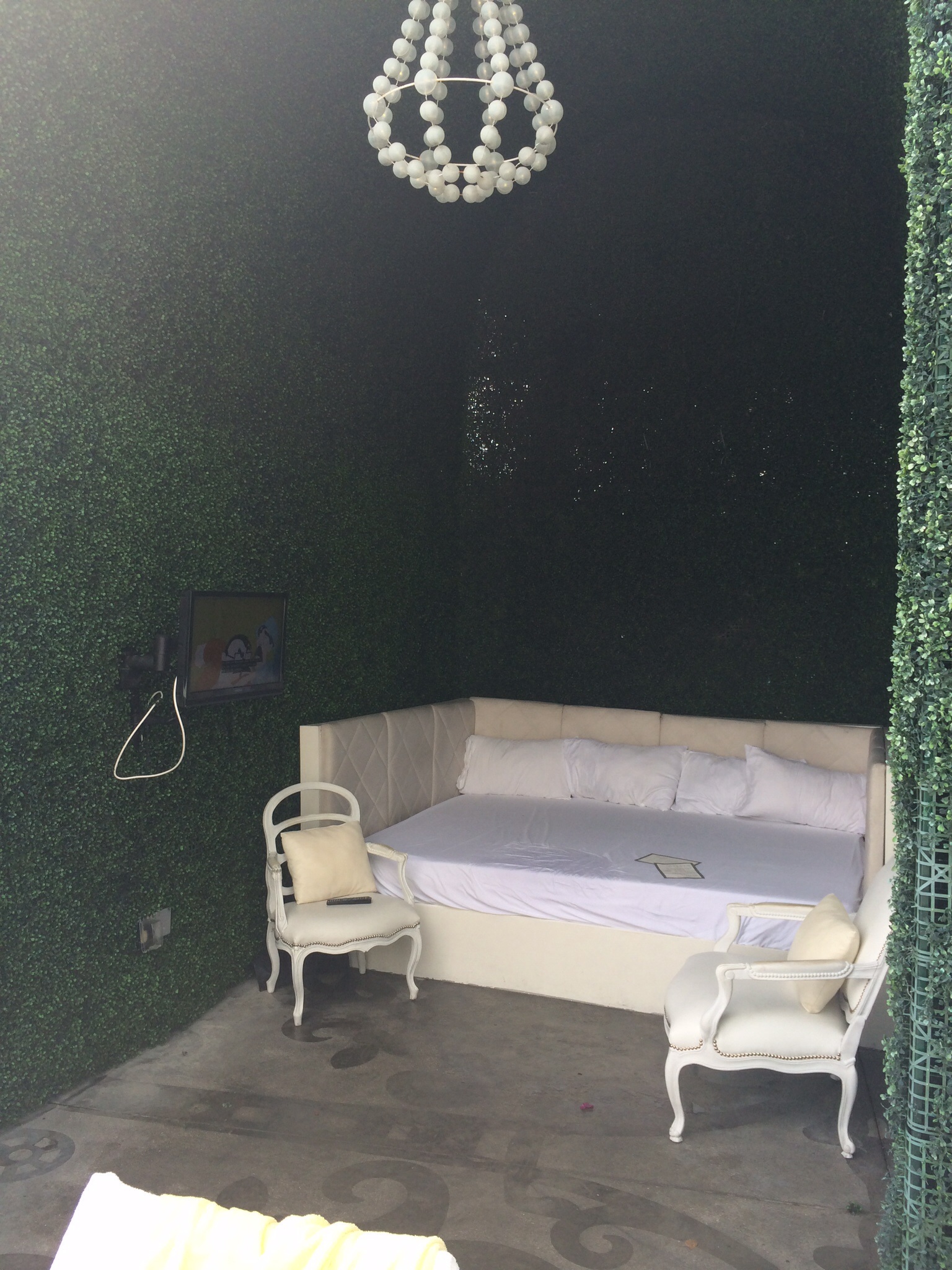 Adverts from Walgreens, K-Mart and countless others are pushing a 'Hurricane Sale' of items such as flashlights, generators and batteries; news stations cheerfully remind you of how to best protect your home from 120mph winds - it's all done with a cheery bonhomie that both startles and comforts you at the same time. The calm before a possible storm. Suddenly, being on the 23rd floor seems disturbingly high up.

No sign of Hurricane Adele, Beyoncé or Conchita (or something) yet, but as I type at 10am, it's proper hosing it down in Miami - so, there you go...happy now?

When the sun shines, though, this place really is quite something. My producer Laurie and I were taken on an impromptu tour of the South Beach 'city' area by Stan Collymore yesterday afternoon. Stan first came here on a pre season tour with Crystal Palace not long after he'd moved from Stafford Rangers in his late teens. He immediately fell in love with the place, and subsequently made it his first port of call for chill out time abroad, even owning a duplex of his own for a time which was a well placed goal kick from the extraordinary Miami Beach.

I say extraordinary as I've never seen golden white sand like it. Not to mention the plethora of stylish Art Deco style buildings that face the beach on Ocean Drive. Stan suggested we toured the area not on foot but instead on Miami's equivalent of London's 'Boris Bikes'. It proved the perfect idea, especially as the bikes we got were a damn sight less cumbersome and tank-like than our capital's version.
Stan has a clear love of the city and everything in it - he proved a most excellent tour guide, pointing out numerous places of cultural interest - how the Art Deco frontages have remained intact over the years whilst the interiors of these places have been gutted and rebuilt many times over; the history of the port and how it became the 3rd busiest sea port in the world; we rode past the museum of WW1 & 2 propaganda material, saw the brash, abstract artwork of local artist Romero Britto at a gallery - paintings more awash with colour than Jorge Campos' jersey collection - right through to the burger joint from the movie Scarface...you know, the bit with the chainsaw? :)

It was a stimulating and interesting little excursion, culminating in a beer and a game of pool in one of the many bars on the Lincoln Road Mall (I cruelly lost to Stan on the black). As I consoled myself over defeat with a Bud Light and took in the France Paraguay game on US telly, I got the overriding impression that this is the perfect place for England to come and prepare. There's a comfortable feeling all around here - a sort of calm focus on what works for the city that mirrors Roy Hodgson's modus operandi for the Three Lions.

No sign of any storms within the England camp yet as you all will have doubtless inferred from what you've seen, heard and read from Roy & co. since the squad announcement. It's all been very low-key and business-like up until now - almost as if we're all hyped out - finally - from decades of unrealistic expectations. The one fly in the ointment (at least as far as I can glean from fan reaction on TalkSPORT to the Peru send off on Friday) is the form of Wayne Rooney, and whether he deserves a place in the starting line up.

It's 10 years since his performances in the Euros in Portugal got such rave reviews and even longer since I remember Sven bringing him on in that Euro qualifying game against Turkey at the Stadium Of Light and utterly terrifying the visiting defence with his marauding runs from deep. It's funny how the other Stadium Of Light in Lisbon proved equally pivotal - the broken metatarsal he suffered the following summer against Portugal began to set the tone for his up & down relationship with England supporters. Age and time have dulled those instincts he showed as a debutant somewhat, and in the notional 4-2-3-1 that England employed at Wembley last week, it could have provided an opportunity for Wayne to approximate that sort of cut and thrust he'd once shown in Sunderland. Trouble is, he didn't define his role quite as succinctly, and the knives appear to be out.

There's no doubting his commitment to be ready, fit and firing for Manaus on June 14th. Taking personal trainers on holiday is nothing less than admirable, and no doubt the goalscoring form of a super confident Daniel Sturridge will have further focused his mind on the job in hand. This isn't quite the last chance saloon at international level that some have suggested for Rooney, but the generational shift going on in the squad will not be lost on him, regardless of the apparent dearth of English strikers who can challenge his ubiquitous status in 23-man squads.

You have to wonder what would unsettle opponents more - Rooney as an out and out striker or a deep lying attacking forward? Certainly when I've seen him play on rare occasions in midfield for Manchester United, he didn't look entirely out of place as a passing footballer, but then others would question whether he has the discipline to play such a role. And they'd have a point.

I've often heard it suggested that Rooney 'gets in the way' of teammates in his desire to get on the ball and affect play, meaning that he both clutters up the area he heads into whilst vacating a space where his finishing can be lethal. For me Rooney needs to be as relaxed as Miami - with the emergence of Sterling, Barkley and late bloomer Lallana, there's a crop of players available to Hodgson that can do what Rooney did on that debut night in the North East and promptly slip the ball to him in an area where he can finish with the quality that few can deny he still possesses.

And that's where the continuity of these warm up games are so crucial to a player like Rooney - get your fitness up to full potency, understand that you don't have to do it all yourself, trust those who've been brought in around you and reap the benefits.

I'm gradually feeling more a part of the press pack as the days go on. Putting names to faces of football writers I've seen fleetingly in press boxes isn't easy and you don't ever want to embarrass yourself by engaging in a conversation with someone you know but all along keep second guessing the bloke's name. These guys win awards for Pete's sake!

I used to get that all the time as a guitar salesman in Brum in my previous life. Customers would come and see you periodically, sometimes for something as simple as a pack of strings or a new lead, other times it was a more expensive purchase. But with some customers, they just never really registered with you despite them knowing everything about you. "Alright.....mate?" became the default opener to such customers as you waited for the moment they handed their Visa over so you could at least see an initial and hope to God it jogged your memory.

Last night saw a few such football writers join Stan Laurie & I for dinner in South Beach. To be fair, I knew a few already and was very kindly introduced to others such as Oliver Kay from the Times so as to avoid any future eggy moments. Dom Fifield from The Guardian provided similar covert information at breakfast this morning as other nameless - to me at least - award winners took their seats in the restaurant.

I'll still get it arse about face with someone before Saturday, I can guarantee it.