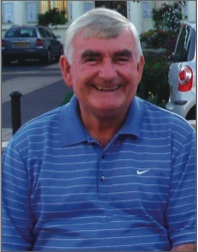 I miss my Dad.

It’s coming up to the 3rd anniversary of my old man’s passing from cancer, and for some reason I’m thinking more deeply about this impending date than either of the first 2 years I was forced to deal with it. Perhaps it’s because Mum has finally been able to sell the family home where we moved to nearly 30 years ago and it’s the realisation within me that we as a family have reached the end of an era.

I’m so pleased for Mum that she’s been able to find a place so near to her beloved golf course where she spends so much of her time, but also a tinge of regret that Dad never got to fulfil his dream of moving into said flat with her, which had been the plan for such a long time with myself and my 2 brothers long since moved out and having bricks & mortar of our own.

My wife has also had a traumatic year coming to terms with the sudden passing of her Nanna and the emotions stirred by the sale of her estate and the pressure that brings has also refocused my mind on what went before.

Dad is the main reason why I am as sport obsessed as I am. He was an avid sportsman, being a top cricketer during his schooldays, which led to a brief association with Warwickshire CCC after he served his country on National Service in the late 50’s. He couldn’t force his way into regular 1st team action at Edgbaston where he was teammates with Dennis Amiss and my talkSPORT colleague Jack Bannister, but went on to play club cricket to a very high standard with Olton & West Warwicks for the next 20 years as opening bat and a wicked off-spinner.

Golf then seduced him as he entered his 40’s and it’s a measure of his popularity, ability and influence that the W.J. Danter Trophy is now contested every year at the club where he and Mum became members as the 70’s became the 80’s. And all through that time, he continued the love of football and Birmingham City in particular that had so enveloped his own father and duly passed that devotion and commitment onto we 3 boys.

And so, whether it was being taken to St Andrews from the age of 5 (in my case) sitting just beyond the boundary rope at St Bernards’ Road during the summer months, or acting as caddy for an important mixed foursomes tournament, Dad passed on his love and knowledge of sport to me at every turn.

Those trips to St Andrews quickly became very special. My first game was as suitable an introduction to life as a Birmingham City fan as it can get - a 3-0 home defeat to a Jimmy Greenhoff-inspired Stoke City…Greenhoff had not long left Blues at that point just to rub it in further.

I fell in love with the place instantly. The lingering smell of cigarette smoke, Bovril and hot dogs that shrouded the stadium like a kind of fog that never lifted, even in springtime; the famous ‘penguin’ strip that Freddie Goodwin’s players wore, Gordon Taylor grabbing the cuffs of each sleeve as he ran down the left wing time and again to cross for Bob Latchford to (usually) score; the anticipation of the half-time scores that would be put up on the Jeff Hall Memorial Scoreboard (the all-important numbers put in position I learnt, years later, by my friend Wes, who worked there with his Dad despite his own abject hatred for the game) ; and perhaps most of all, the opportunity to watch Trevor Francis in his prime, for which all Blues fans of a certain generation will be so appreciative of to their fathers & grandfathers who made them go down there as I did. Jasper Carrott’s comedy routine on TF was unerringly accurate and affectionate at the same time. We all loved and revered him and secretly knew he would outgrow an unambitious board that broke up a potentially great side by first selling Latchford and then later Francis.

Those sales, coupled with the inevitable relegation that followed, were an important lesson that Dad wanted me to learn and digest about what loyal support meant and how you learned to channel the many disappointments that would surely come over the years. You don’t just have to be a Bluenose to understand that.

Of course, for Dad there came a tipping point for Blues – a point where he couldn’t face another season of obscurity. The ’75 Cup semi-final defeat to Fulham tore him apart (Mum told us boys not to speak to him at the breakfast table the following morning) and when John Barnes denied us a semi final appearance in the 80’s for Watford, you sensed that he’d seen enough. Seeing as I was reaching an age of adolescence where I could be trusted to ‘go it alone’ as it were, his trips with me became more sporadic until, by the 90’s it took a Herculean effort on my part to persuade him to pay B9 a visit.

He never bothered with the Wembley wins in the 90’s and I can probably count on one hand the games he attended at my behest whilst we flirted with mediocrity in the 2nd & 3rd tiers of English football. Not that he wasn’t interested – he actually took a kind of peverted gratification at seeing the continuation of ‘down’ moments with precious few ‘up’ moments as I saw it with my own eyes and related to him back at home or over the phone.

Things changed a little when I first got the job of Blues’ Stadium Announcer and then becoming a football reporter for Tom Ross at BRMB in the late 90’s/early 2000’s. Suddenly I was travelling the country watching Blues (as well as the other teams on our ‘patch’) and passing comment about performances on the air whilst also getting the chance to get close to players and managers.

No matter where I was sent to report or commentate, my first call as I sat back in my car at the end of my day ahead of the drive home was to Dad. It’s that which I miss most of all when I think about my work now. I valued his opinion so much and learned more than I could’ve imagined watching televised games with him as a boy that such conversations about tactics, form and players/managers helped me become the broadcaster I am. He would know the scores ahead of my call, naturally, and anticipate the phone ringing to deliver a deadpan soundbite immediately as he picked up the receiver back at home “Jon McCarthy for England now I suppose?” it would go, or “Usual quality cock up from Coly was it?” or occasionally something like the day Blues were thumped at home by Arsenal in their 1st Premier League season. I walked back to my car crestfallen that our debut season in the big time was going to disintegrate by February based on such home defeats. Dad had other ideas – his first utterance? “That French chap…Dugarry is it?...He will keep Birmingham up single-handed…” Dead right, Dad.

He also educated me on the importance of Boycott & Tavare dropping anchor against India at The Oval, on the mentality behind Nick Faldo & Sandy Lyle’s successes in golf’s majors and waxed lyrical about Hoddle, Charlton & Platini at length. It’s thanks to him that, on Blues away days when I was younger, I would prefer a seat in front of World Of Sport on ITV rather than play with my Matchbox cars or Lego – I put my love of Banger Racing from Hednesford, Ice Speedway from Vladivostok, International Log Rolling from Texas and the majesty and mystery of Kendo Nagasaki solely down to the old man…not to mention the drama of the vidiprinter on Grandstand, years before Chris Kamara was screaming “Unbelievable Jeff!!” whilst grinning like Conrad Poohs and his Dancing Teeth on Monty Python and you knew everything about every game all at once on your TV.

Well, its 7 years this year that old man Dock passed away.
Doesnt get easier and still think about him every day.

Glad your mum has moved on, my mum is still in the old house and has no reason or wish to move - she is happy in that place. She has lived in it since she was 6 years old. My mum and dad bought it off my nan and grandad.

Hope your mum goes off, and does some things she wants to do.

Send her my best! Xy