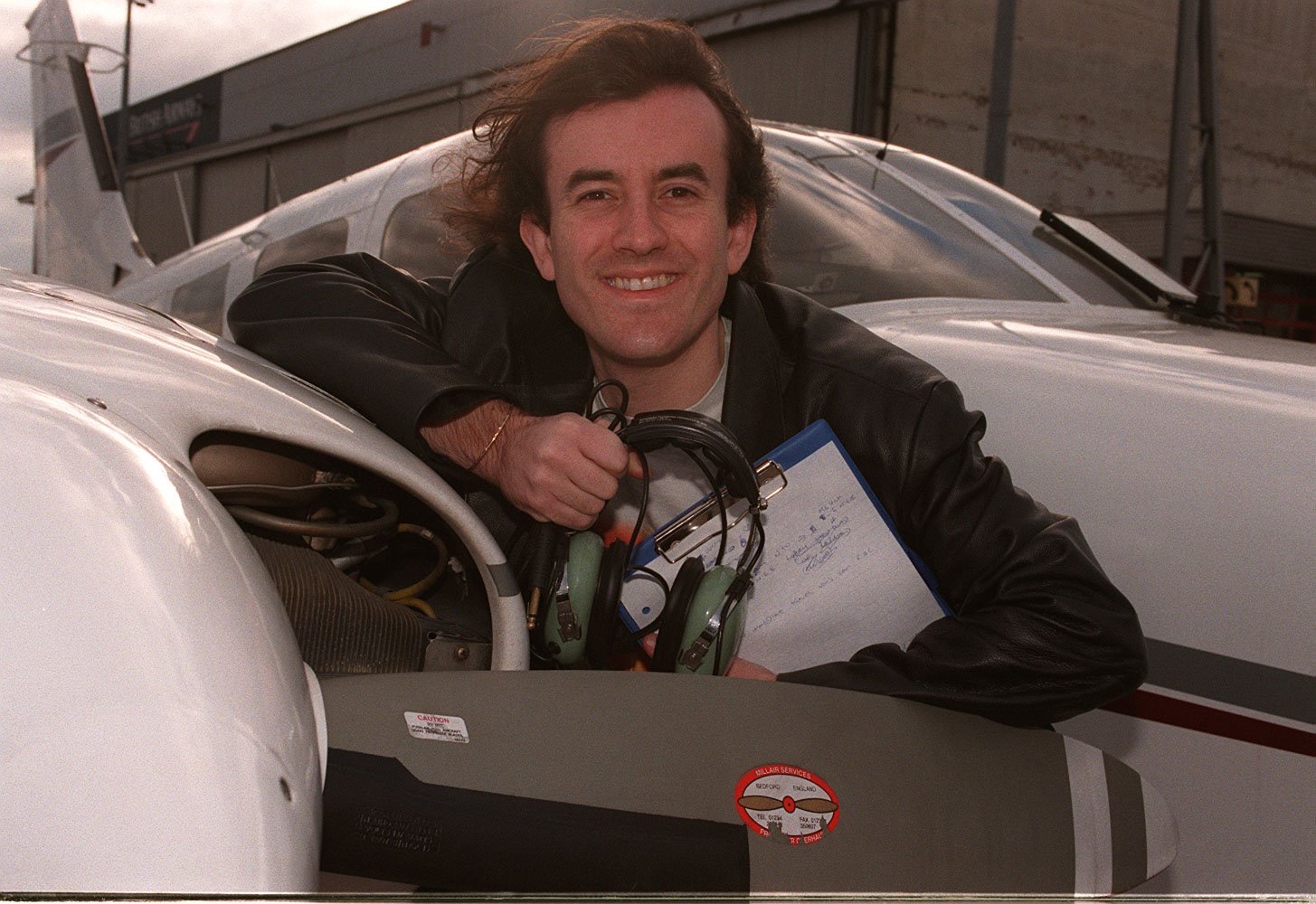 Up until 20 years ago, nobody called me 'Dants'

Maybe it's just as well that 'Dants' has stuck lately.

It's solely down to my 2 decades in broadcasting that the shortened version of my surname has become so heavily used. So much so, that, aside from family and close friends, the only person I know who still calls me just 'Ian' is Ray Houghton…I don't think he's used 'Dants' once…there's always the exception that proves the rule.

It was February 16th 1998 when I began my role as the BRMB Flying Eye travel reporter after the swiftest of swift career handbrake turns. I've explained how that all came about in a previous blog on here ( http://www.iandanter.co.uk/blogs/tues-8th-november-2011-how-it-all-began... ) so it doesn't really need repeating. From that first day 1500 feet up above the Birmingham skies via XTRA AM's Elvis Hours, Beatles Hours, BRMB weekend overnights, weekend breakfast, Barmy Brummies, Play-off final victories, shopping telly, Heart FM Sunday Carve-Ups, talkSPORT, World Cups, Planet Rock, European Championships, and latterly through to talkSPORT LIVE International Service, talkSPORT 2, Champions Trophy Cricket, PDC World Darts and - yes - Screwfix, it's been quite a ride…sometimes as bumpy a ride as we used to get in that Seneca 6-seater plane where it all started, but the journey continues with all of its surprising stops along the way.

The whole medium of radio - where I've spent the vast majority of my broadcasting life - has changed so much in the last 20 years. The commercial radio industry itself is way smaller in terms of the opportunities that were available to the likes of me back in the late 90's. Presenting talent has looked on as companies buy up competitors leaving only a few major players in terms of ownership. That hasn't necessarily affected me, but I can think of a number of colleagues who, having burned their bridges with one network in leaving for a rival station group, saw that rival station bought out by the very company they had previously bad-mouthed…and their fate was sealed. Just a matter of whether it would be weeks or even days before the axe swung.

I get regular correspondence asking me whether 'The Barmy Brummies' could ever make some kind of return to radio somewhere - for the uninitiated, that was the BRMB Drivetime show that I hosted from 2000-2002, combining the station's hit music playlist with comedy sketches and parody songs written and performed by me and my wingmen Sean Percival & Andy Robinson.

I look at radio today, and it's getting harder to see a place where that sort of show could fit in. Not only from the point of view of how such a show sits alongside the other programming output, but also whether you could 'get away' with the sort of material we used to broadcast in the early noughties. I was often told that the Jaguar/Land Rover production line in Solihull stopped dead to hear our Des's Dedications or Black Country Bob sketches, such was their popularity on BRMB. That was an era when BRMB were dominating the schedule right across the day and night, so I wasn't alone in generating a captive audience, although I may have been chief culprit at slowing productivity in the car industry!

Funnily enough, in recreating the same sort of show on Heart FM with the Sunday Carve Up between 2004-6, I always felt my show there stuck out like a sore thumb from the rest of Heart's output. I was always incredibly grateful to Alan Carruthers the programme director for taking a risk by hiring me and believing in me back then, and we had a good run, but once his replacement arrived in late Spring 2006, I knew the dye was cast and I would be surplus to requirements in Midlands independent radio.

By that time, my talkSPORT commitments were increasing and so the news that my Heart contract wasn't being renewed in Summer 2006 was countered by getting a Friday night show on talkSPORT having done over a dozen commentaries for that summer's World Cup in Germany. Since that time, I've left the comedy thing behind generally speaking. And if I was asked to present a show similar to what we created with the Barmy Brummies in this time of more and more people not happy unless they're unhappy with a joke they've heard and believe that everyone should be offended by, I'm not sure how long we'd last.

I've also been asked many a time whether I'd ever been close to joining the BBC. The simple answer to that is no - I've never once been approached by Auntie Beeb and equally have never really sought to find a way in there myself either locally or nationally at the same time. I've always ploughed my own independent furrow in broadcasting - and that includes never having had an agency representing me. As time goes on looking at my peer group, I'm increasingly isolated in that situation. So many broadcasters are looked after by someone or other, and I've often wondered whether I'd be in a more advantageous position if I did the same.

And then I think about how fortunate I've been and the progress I've made and think 'Well, you've handled it kind of alright up to this point!'

That said, I wouldn't be here without a number of very, very important people. Not least Tom Ross, who gave me my initial break with the football sketches I wrote and performed for his football show, before enlisting me as a football reporter and commentator following on from such illustrious names as Ian Crocker and Jim Proudfoot before me - a role that continued for 2 years beyond my time as a BRMB main presenter! And then there was Paul Jackson, Programme Controller at BRMB, who took many a chance with me over the 4 years I spent at the station believing that I had the talent to justify his faith in me despite my inexperience in the medium. That was crucial in so many ways - it was tough love at times, but boy how I needed it, eh Paul?!

After that, I must mention and thank Steve Bennett who offered me a route into TV presenting in 2002 after my BRMB stint had ended, which turned into 5 happy years at his company which went from 'Toys Games & Hobbies' via 'Factory Outlet TV' and 'Snatch It TV' to the hugely successful 'Gems TV/Gemporia' that still airs to this day. I must have racked up many 1000's of hours of live TV presenting in those Redditch studios and learned even more than I realised about myself, broadcasting and teamwork. Brilliant times.

Then there's the aforementioned top man Alan Carruthers at Heart FM, who gave me a route back into music radio presenting & comedy in 2004 with the 'Sunday Carve Up' which was nominated for a Commercial Radio Award that year. Something more earnest won, I seem to recall…

If it wasn't for my pal and former BRMB sports reporter Nigel Pearson, I would never have had the chance to join him and the talkSPORT team that he was part of in 2004. I initially joined as a Midlands-based match reporter on his recommendation (he'd joined the station on its inception at the start of the decade) and we're still both heavily involved now - nearly 14 years on in my case. There's been a long succession of Programme Directors in that near-decade and a half, like Steve Hodge, Moz Dee, Liam Fisher and now Steve Morgan & Mike Bovill, all of whom have seen fit to keep me at the heart of the station with a myriad of different roles.

I still remain, to my mind, the only talkSPORT presenter ever (with the possible exception of the frankly exceptional Danny Kelly) to have covered every show in every time slot of the 7-day schedule. As long as you discount Fisherman's Blues anyway.

I've also been the first voice heard on the international talkSPORT LIVE commentary service that launched in 2013, and was the first voice on talkSPORT 2 when that began broadcasting live nearly 2 years ago at the Cheltenham Festival. That's pretty jammy really. But I guess it also shows a level of trust shown my way by those who make decisions about how they want a newly launched station to sound right from the off.

I've learned a lot about myself in the last 2 decades in going from selling microphones to talking into them professionally - and it's not all good stuff. Nobody avoids mistakes or off days in any walk of life, and broadcasting is no different…other than the number of people who get to hear or see your mistakes and off days! Alvin Martin once told me of footballers 'If you have a player, and he makes a particular mistake once in games or in training, you pull him up on it but you can live with it; if he makes it twice, you start to wonder about him; if he makes it three times, you realise he's probably not worth persisting with, cos nothing's sinking in…'

So, whenever I get a rollocking for something I've done (or not done) on-air, I am desperate to cut that out for good at the first time of asking. Saying 'er' and 'um' too much in my very early days, for example, was a habit I just had to get rid of. You don't really eradicate such a thing 100%, especially in live sports broadcasting where anything can happen in front of you that you're not expecting, but if you want to police it and you work at it, it can be largely eradicated. And personally, I think that's important.

I do hope that in 20 years from now I can be looking back at 40 years in this business we call show - but you rule nothing out and nothing in when you're in this game. It's as volatile and changeable as any industry you care to name, but as the old saying goes 'Choose a job you love and you'll never have to work a day in your life'.

It is still hard work, mind - just ask my car's engine and tyres!

Used to be a regular on the media circuit and there was nobody, but nobody, i looked forward to seeing more than Dants- apart from maybe the catering people at Stamford Bridge. Missing your impressions and anecdotes pal. Your company is anything but as damp squid. And rightly so. X

That’s very kind of you to say - thank you!