10th January 2017 - The 5 most overlooked and underrated drummers 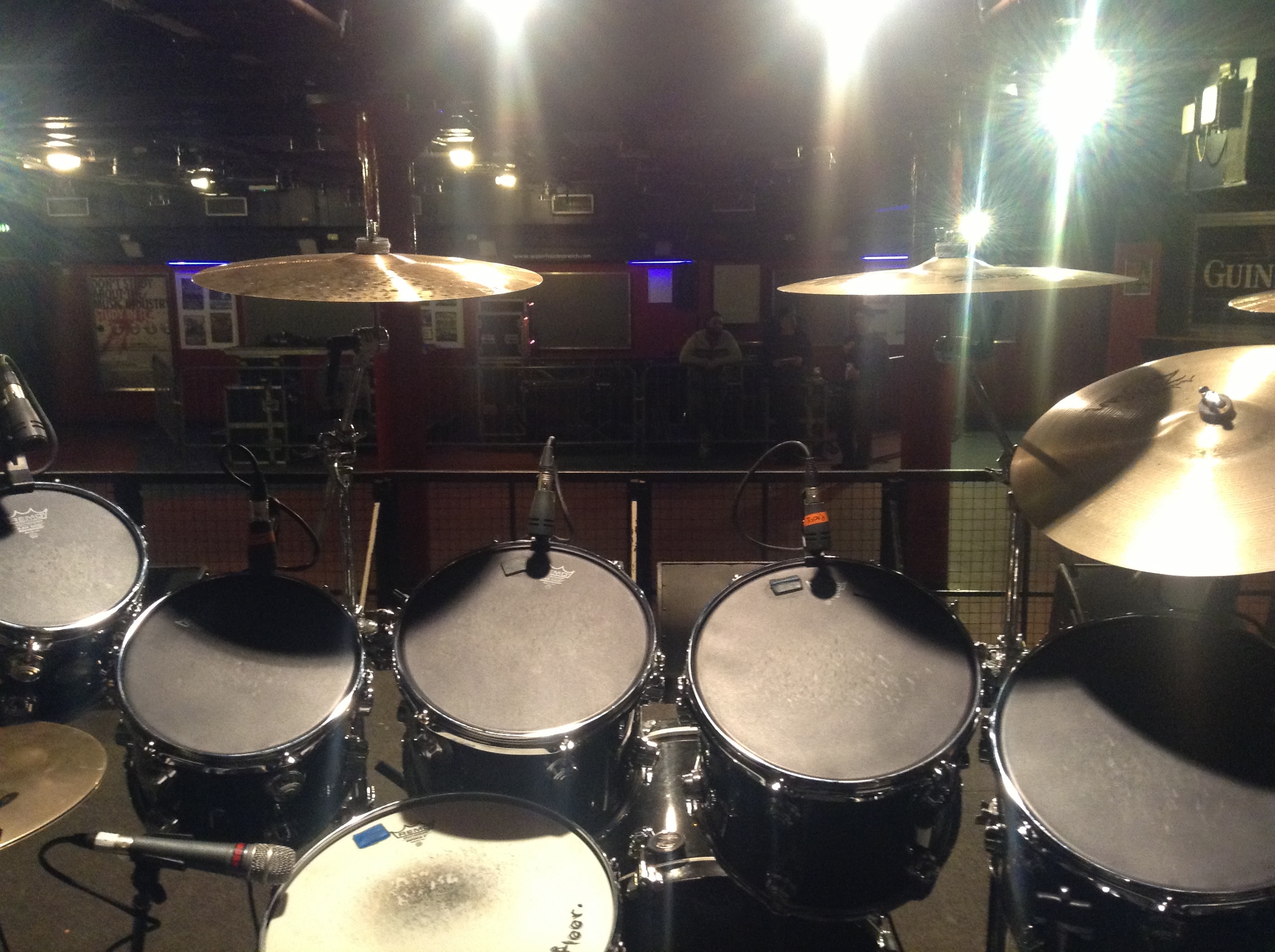 Well. Every bugger else does 'list' blogs these days, so....

Many's the time I've read a 'drummer of the year' poll in Rhythm mag or Modern Drummer and I've fully understood why Neil Peart, Steve Gadd or Keith Carlock have dominated proceedings over the years. They're brilliant players, attaining levels of control, technique and finesse that leave us all open-mouthed and more than a little inadequate by contrast. But that's fine. We can't all be like 'The Professor'...I'd still love just 5 minutes sat behind that 'Time Machine' kit though :)

Football is, as you know, a very important part of my life, and at the traditional end of season dinners across the country, awards are given for Player of the Season to outstanding and deserving talent. the award I always like is the 'Clubman of the Year' award, given typically to a player who has somehow gone under the radar with a significant contribution but is nonetheless appreciated and honoured for that.

So I started thinking about the drummers who influenced me as a lad, and initially I got a but lazy and thought of Ian Paice, Cozy Powell, Phil Collins, Brian Downey...players who were very much front and centre at the start of my learning process. And they're all still influencing me now just as much.

But then there are those drummers who are passed over for one reason or another - not through ignorance or wilful neglect, but rather just an acceptance that they 'do the job that's asked' of them and that's enough notoriety for them to receive.

As a result, for my own self-indulgence mainly, but hopefully for your enjoyment (and further research if some of these names don't register), here's a list of 5 drummers who ended up shaping my playing style just as much as their famous counterparts. Rarely (if ever) cover stars of drum magazines, but no less important for that. Anyway, away we go...

*NOTE* I could list a number of players who I've never seen play live, but I've stuck to those I've seen in concert...so Animal & Mick Tucker (Sweet) will have to go in another list another time

By the time I was aware of The Tubes in the early 80’s, the more excessive parts of their live act had begun to disappear and their recorded work had become far more polished, thanks in no small part to the production skills of David Foster on their albums ‘Completion Backward Principle’ and ‘Outside Inside’ – I loved Prairie Prince’s drumming on these albums; clinical, precise and with some really smart tom fills to go with the snap he has on the snare. ‘Tip Of My Tongue’ off ‘Outside Inside’ is one excellent example of his precision. You just know he’s capable of so much more from a technical point of view, but he’s clearly a player for the ‘song’ aspect.

Key song; ‘Tip Of My Tongue’ (Outside Inside)

One of my biggest drumming influences as a teenager and I can’t believe he isn’t feted as much as he should be. Vinny’s style is so unique – to me it is, anyway. Dio’s debut ‘Holy Diver’ was where I first heard him – an album recorded in the drum-friendly surroundings of Sound City, Van Nuys. Straight away, I loved his attack on the snare with his rapid-fire single stroke fills and I learned the art of subtle grace notes on the snare from him above anyone else. He never sounded like anything was too much effort, playing great heavy patterns with a real economy of movement, and the smoothness with which he played Dio’s slower, more moody material was really effective. He left space so well, without feeling as though the drums had to fill every bar.

He proved that he still possesses that smooth technique on the last Heaven & Hell album ‘The Devil You Know’ on tunes like the brooding ‘Bible Black’. And now that 'Last In Line' are touring the hits of Dio once again, you can still see Vinny giving it plenty live with that terrific right foot of his driving the band along.

Now this guy is a PROPER unsung hero behind the kit. I’ve seen him live more than most drummers I reckon, as he’s been a mainstay in Bryan Adams’ touring band since Reckless became a hit album in the mid-80’s. I’ve said enough times to anyone prepared to listen to my inane ramblings that if I could play like any drummer, then I would choose Micky over the Pearts, Portnoys and Paices that have topped many a drummers poll during my lifetime.

The simple reason for this is that I see Micky as the ultimate ‘song’ drummer, with a fluidity and an apparent ease with which he sits just behind the beat and makes the ‘groover from Vancouver’ do exactly that i.e. groove. He also did a sensational job as session player for The Cult’s ‘Sonic Temple’ album (‘Fire Woman’, ‘Sweet Soul Sister’ et al) after Eric Singer – now of KISS of course – had worked on the demos with Messrs Astbury & Duffy.

As I say, I’ve seen Micky many, many times and he has never failed to impress me – he once said that playing Bryan’s material allows him to be ‘him’ more than in any other musical environment, and that doesn’t half show. I’ve also noticed just how LOW he sits at the kit – much lower than pretty much any other drummer I’ve watched. Maybe I should lower the old throne a wee bit more…he is, I think, my favourite overlooked drummer of them all.

Pat was, in a rather unfortunate way, the ‘unknown’ member of the late 80’s supergroup Mr Big, alongside Eric Martin, Paul Gilbert & Billy Sheehan, although his session pedigree was undeniable by that point, having toured with John Parr and Belinda Carlisle whilst also being brought in as Robert Plant’s touring drummer as Mr Big were just getting off the ground.

If you’re going to keep up with Gilbert and Sheehan competing lick for lick with one another, you need to keep things tight rhythmically. This was where Pat came into his own. His grounding in jazz, funk and soul as a youngster brought a whole load to the band, but again, didn’t need to show off in every song (he left that to Paul & Billy in front of him).

Again, it wasn’t until I saw him play live that I really understood just how talented Pat was. It was on the ‘Lean Into It’ tour when I got to see him play and his double bass drum work was jaw-droppingly good. Not only that, but his backing vocals were brilliant (particularly important to someone like me who saw himself as a singing drummer) and, in an awesome visual gimmick that he had, he could reach behind his head for his mic stand and pull in round and into position when backing vocals were required without missing a beat – no need for a roadie to swing it into position or move it back after he’d finished with it…doesn’t sound that impressive, but believe me – if you saw what he was still able to play whilst in the process of grabbing said mic stand, you’d have been as speechless as I was!

Illness in recent years (specifically Parkinsons Disease) has affected Pat’s ability to tour and play regularly with Mr Big, which is a dreadful shame. He still does occasionally step behind the kit with the boys and no doubt still outplays all of us. Love him to bits.

Grabbing the limelight off Freddie Mercury (and, to a lesser extent, Brian May) is a thankless task for any drummer, but can you honestly think of another British drummer who has shown as much versatility across his body of recorded work than Roger Taylor? I can’t.

In the space of just one album for example (Sheer Heart Attack), he drove the band along through powerful heavy rock stuff like Now I’m Here & Stone Cold Crazy, gave a lighter touch to poppier tunes like Misfire and then had the confidence swagger to carry off what I can only describe as ‘Charleston-esque’ drumming on Big Bad Leroy Brown.

He has a signature move as well which makes his playing instantly recognisable – that thing where he opens the hi-hats and hits them as he strikes the snare…you can hear it throughout his career, but that Sheer Heart Attack has it front and centre on pretty much every tune. It’s so intrinsically him – that’s Roger’s thing, and no one else does it like him.

His unfeasibly high vocal range, such a perfect foil for Mercury’s lead and May’s slightly softer and lower vocal delivery, gets loads of press, and he wrote some brilliant songs for Queen (Tenement Funster, Sheer Heart Attack and Fight From The Inside on which he played & sang pretty much everything!) but it’s his drumming that deserves to be commended above all else.
The more varied Queen’s writing became through the 70’s and into the 80’s, Taylor played his parts to perfection. I actually really like his playing (and the drum sound/production) on the posthumous ‘Made In Heaven’ album, released after Freddie’s passing in 1992.

I was lucky enough to be at Wembley Stadium in 1986 for that infamous televised gig from the ‘Magic Tour’ and he was pitch perfect throughout. Thankfully, players like Taylor Hawkins have acknowledged his ability as a drummer in recent years and thank goodness for that. He may not be a virtuoso drummer with flawless rudimentary technique, but you won’t find a more inventive compositional drummer than Roger Taylor in all of Rock music. You imagine being played Big Bad Leroy Brown by Freddie on the old Joanna during the recording process and trying to make sense of that!! Simply brilliant.