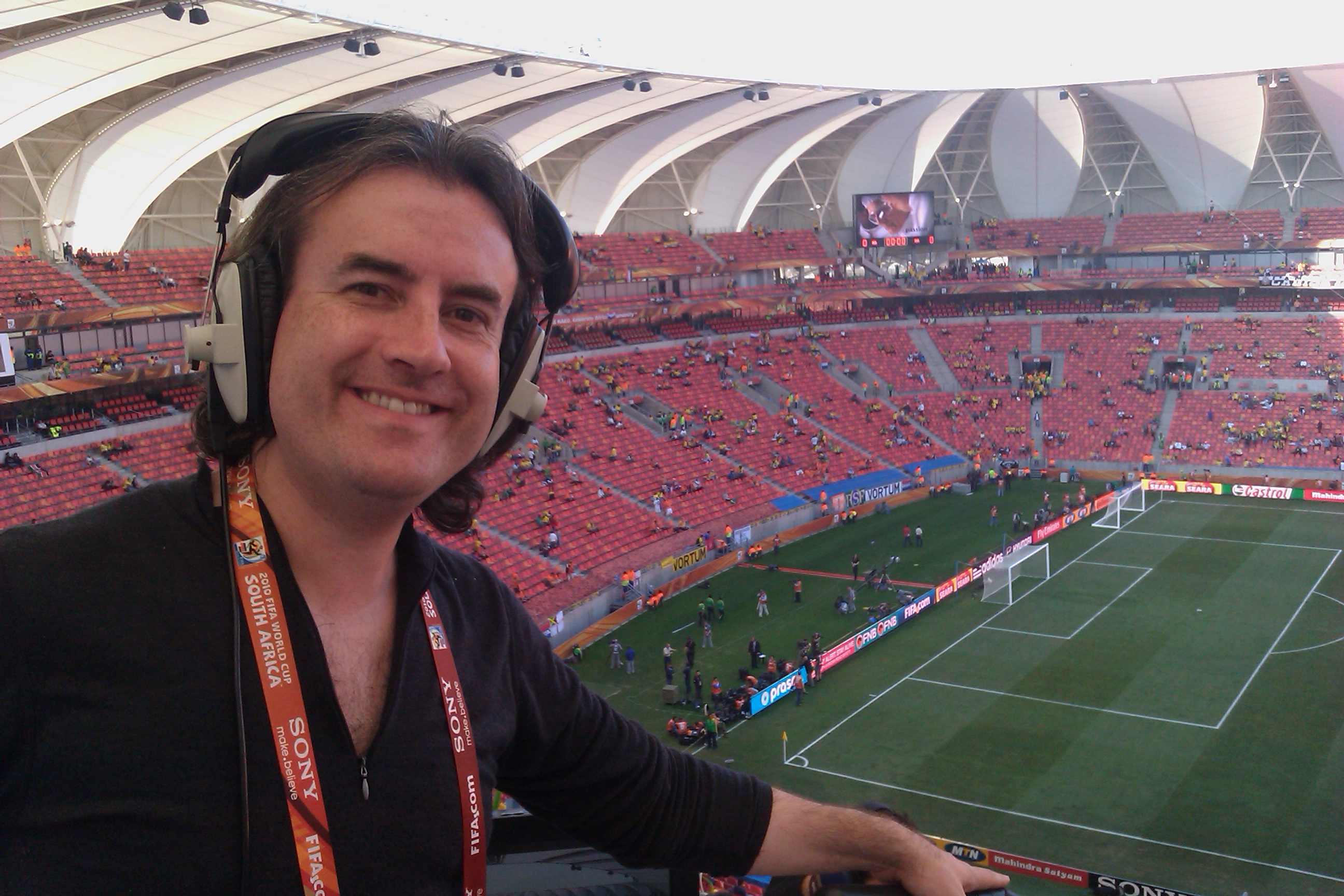 Well that was a mad 24 hours and no mistake.

Ray & I were dispatched to Port Elizabeth first thing Friday morning to cover Holland Brazil in a slight change of plan - we were due to do both Jo'burg games, but as Stan & Jim couldn't get flights from P.E. to Cape Town, it was easier for us to fly in and out on the same day and for Stan & Jim to do the same in Cape Town today for Germany's annihilation of Argentina...at least we scored against the Germans. Twice.

Anyway, we had to catch the first available flight which got us into P.E. at 10am local time, 6 hours before kick off. We met some Baggies fans in the terminal building, who were half expecting to be flying to see England in the quarters, and they told us what a great time they'd had on their travels - the only downside, one said, was 'those blooming Zuberbuhler things'. Getting B flat trumpets a tad confused with former Albion keepers there. Nice blokes though...

I'd been flapping about the potential weather on the South Coast - it's not known as the "Windy City" for nothing and I was on our flight south resplendent in my thermals and fleece...as we emerged into 24-degree heat.

Fearing a demise not unlike the Wicked Witch of the West I stripped off as much as was legal, and Ray & I shared a nice drink on the sea front of a city that looked not unlike any English south coast resort - aside from the dirty great oil refinery and docks that dominated the shoreline.

It was truly the calm before the storm, as we realised we had a job to do at the impressive stadium nearby - what a game it was between the Dutch and the Brazilians! Brazil coming out of the traps so quickly to hit the front, only to fall into the traps set for them by Bert van Marwijk, notably the decision to isolate Michel Bastos with Arjen Robben's pace. Bastos was lucky to stay on the field, Felipe Melo was daft enough to stamp his way off it, and Wesley Sneidjer collected a brace to effect a startling turnaround. Even more startling was the decision today to give Wesley the first goal - unless Fifa felt they'd punished Melo enough with the red card. We were all punished by the state of the pitch by the way - a surface provided by the same company that screwed up Wembley so badly.

Easily the most nervous I'd felt before a commentary, and I paused at the start expecting the national anthems only for a audio gap large enough for you to drive 13 buses through, whilst Van Bronckhurst and Lucio mumbled their way through an anti-racism message. That glitch aside, I reall enjoyed it. The wife did too back at home listening with the children whilst watching the TV pictures. The kids were especially fascinated with how far ahead my commentary was of the pictures they were watching - around 6 seconds ahead, and they squealed with delight at regular intervals as I was able to seemingly predict what was going to happen...if only I could :o)

24 hours on and Ray Parlour and I are inside Ellis Park with Mark Saggers readying ourselves for the last 1/4 final between Spain & Paraguay. Mr Torres hasn't shown up yet and looks to have the weight of the world on his shoulders. Tonight has to be his night - Spain cannot keep relying on David Villa to get them through - or can they?

As usual, Paraguay will park the bus (or maybe the 13 buses I mentioned earlier) and hope to hit on the counter-attack. Sergio Ramos could be their best hope of exploiting a weakness - we shall see eh?

***UPDATE*** What a 3-minute spell at Ellis Park where Paraguay missed a pen, then Alonso missed a twice-taken spot kick straight after with the stadium not knowing where to look next. Villa was magnificent when it counted yet again, and Torres was as anonymous as I's suspected beforehand. Oh, and Roque Santa Cruz came on as sub and, just like pretty much every other Premier League player at this World Cup, strolled around like a right Jessie and put in the square root of bugger all work.

Can't think of too many PL players who've justified their billing - aside from Kevin Prince Boateng of Pompey and Ghana...where did those performances come from????? At least he'll clear more debt than Portsmouth thought when they sell him now!!! :o)