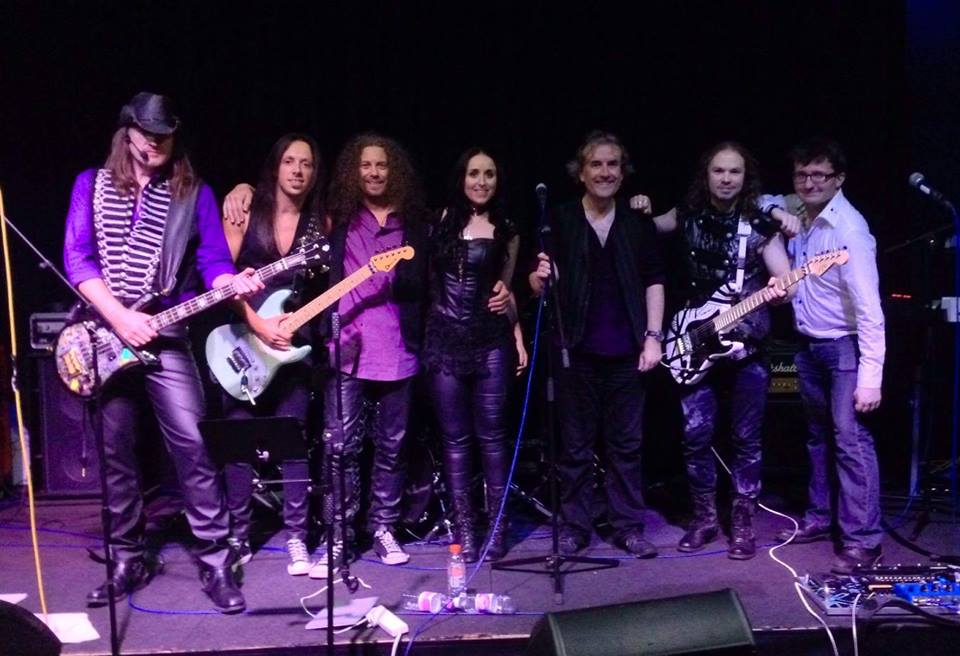 It’s been around 2 years in the planning, but I’m one small part of a new covers band that’s now rolling off the production line.

Gary, my old Demonic compadre from Dressed To Kill got in touch sometime in early 2014 wanting to get a project off the ground that he’d shelved in the couple of years previous to that. Essentially what he wanted was to put together the best possible line-up of musicians to play a quintessential selection of Rock Classics and Power Ballads in theatre venues – the idea being to aim for the greatest possibly accuracy of delivery and authenticity whilst giving the ticket holder a brilliant night of 70’s/80’s Rock nostalgia.

God knows why he asked me to be drummer, then ;)

Anyway, he had a selection of musicians together previous to getting in touch with me - that collective hadn’t quite worked out schedule-wise, but he was still keen to try and find the right balance and blend of talent to see his vision come to fruition.

I remember meeting up for a curry (it’s usually over a curry) in Winchester one chilly evening in late 2014/early 2015 to discuss ideal songs/artists for the setlist with Gary and a keyboard playing pal who ultimately couldn’t commit to the project…the opinions were as strong as the spices in the ruby – but we did hammer out a framework of the songs that simply couldn’t be ignored for such a project (in the same way that Kiss tributes can’t ignore Rock And Roll All Nite) and those songs that felt similarly irresistible whilst being more savvy choices to add to the mix.

Within months, Gary had pretty much single-handedly found guitarists and a new keyboard player to complete the ‘band’ aspect of the project. Twin guitarists Micky & Dan came as a team who not only knew each other’s styles and strengths inside out but also had plenty of professional experience in touring and recording outfits. New keyboard player Oscar had contacted Gary back in the very early days of his attempts to start the project off, and Gary had remembered his unbridled enthusiasm when it became clear we needed someone new to tinkle the ivories.

Next thing you know we’d gathered at a secret location in the South East in summer 2015 to try each other out musically. These sorts of occasions are always hit or miss – apart from Gary, I’d never played a note with any of these guys, so you’re immediately hoping you make the right impression without overdoing it in order to make that impression i.e. showing off. Thankfully, we’re all too old (Oscar excepted) to bother with all that ‘alpha male’, testosterone-fuelled nonsense. It quickly became clear that things were clicking very nicely.

Songs were added and jettisoned as rehearsals continued throughout the rest of last year as the set took a bit more shape. Not every tune you envisage working actually does – either it’s a technical thing, or quite simply it doesn’t ‘feel’ right in context with everything else around it. What was clear was that we would need both a male and a female lead singer to compliment what we already had in place – which was Gary’s idea anyway - but it would certainly give us much more flexibility and versatility.

That would mean one thing I’ve only rarely experienced in my 30-odd years playing in bands…namely open auditions.

I’ve mentioned in a previous blog how I kind of auditioned for Shotgun Wedding in 1988, and I did try out as one of several candidates one day as ‘Ace’ for Dressed To Kill in the early 2000’s when they were searching for a Spaceman (wisely, they chose Danny and not blagger Danter). Aside from that, any vocalists that came into try out for Shotgun Wedding down the years were invited to come along as stand-alone auditionees rather than be part of a ‘queue’ of potential warblers.

With us, it would be a case of a 30-minute blast accompanying a succession of ladies and gents with mics in hand over a couple of rehearsals. One or two of us had put the word out on musicians’ message boards and the response was very encouraging, but it’s always a journey into the unknown for all concerned, even when all the prospective singers knew what the audition pieces were.

We didn’t have any singer show up that we wouldn’t have happily put in the band to be honest. All were absolutely top drawer and had their qualities that would’ve served us so well, but we had two outstanding candidates. Tanyth was (I think) the 2nd lady that came down to sing with us, and I still remember the moment when she nailed Ann Wilson’s high note in ‘Alone’, which had the rest of us sneakily looking at each other as if to say ‘Blimey, that’s a bit special!!’ All were in agreement that Tanyth was just too good to ignore.

Paul Manzi’s desire to get involved was a really pleasant surprise to me – Gary & I knew him as the lead singer from the truly excellent Cats In Space project. He expressed an interest in being part of our little shindig and again, he was just terrific – as were all the other guys (and gals). But his audition just tipped the scale for the rest of us, as with Tanyth.

We were now a fully-fledged band. Leather And Lace had arrived!

Early on, I was handed the role as ‘musical director’ of this band – mainly because of my anally retentive attention to detail in getting arrangements and ‘sounds’ right from song to song. Again, as I’ve noted in previous blogs, this attention to detail has not had the desired effect on some band mates I’ve worked with over the last 3 decades. In short, my desire to have it ‘right’ has made me very unpopular at times.

In truth, there isn’t much direction needed for experienced musos such as this group, but I guess because I do listen to tunes from every band members’ perspective (not just my own) I am sympathetic to making sure everyone is comfortable with what they’re doing, whether it’s a riff, vocal phrasing, a backing vocal part, whatever. I do enjoy that part of it an awful lot – I made a LOT of ‘notes’ for the poor sods to read, learn and inwardly digest! ;)

The ‘end of the beginning’ if you like came with our first live warm-up gig in late October 2016 at Chesterfield’s top drawer Real Time Live venue, which most of the band have happy previous experience of with previous bands over the last couple of years.

Any new band will tell you that rehearsals are all well and good, but you only truly find out how well things work once you’re in front of an audience. Not only that, but also how you deal with looking and interacting with that audience rather than looking solely at your colleagues as you do in a rehearsal space. With 7 of us to fit on a stage, space in Chesterfield would be at a premium, but not so restrictive as to make things uncomfortable.

I shan’t inflict a song-by-song report on you here as the night unfolded – but I will happily say how great it was to work out the bugs for our first live performance and just how well everyone played and sang. What was really great was the desire from all to strive to get better and better, even after a show packed with highlights from all concerned. Trust me, good musicians are always tough on themselves backstage if they feel they’ve fallen short of their standards, but my adage is always ‘leave the gig on the stage’, at least in the immediate aftermath. Reflecting on an individual or a collective performance is always more objective a day or two on.

And that ‘day or two on’ is usually when YouTube or Instagram strikes with evidence of what you’ve done filmed on a smartphone at close range, with all the audio shortcomings that filming with such devices can bring. I can barely watch anything online from my solo gigs where I’m singing – but I’ll happily sit and watch Leather And Lace gig vids forever and a day based on what’s surfaced in the last 48 hours since we played!

So - we’ll see you out there somewhere on the road in 2017. Dates will be announced as they come in via our social media streams;

And here of course… ☺