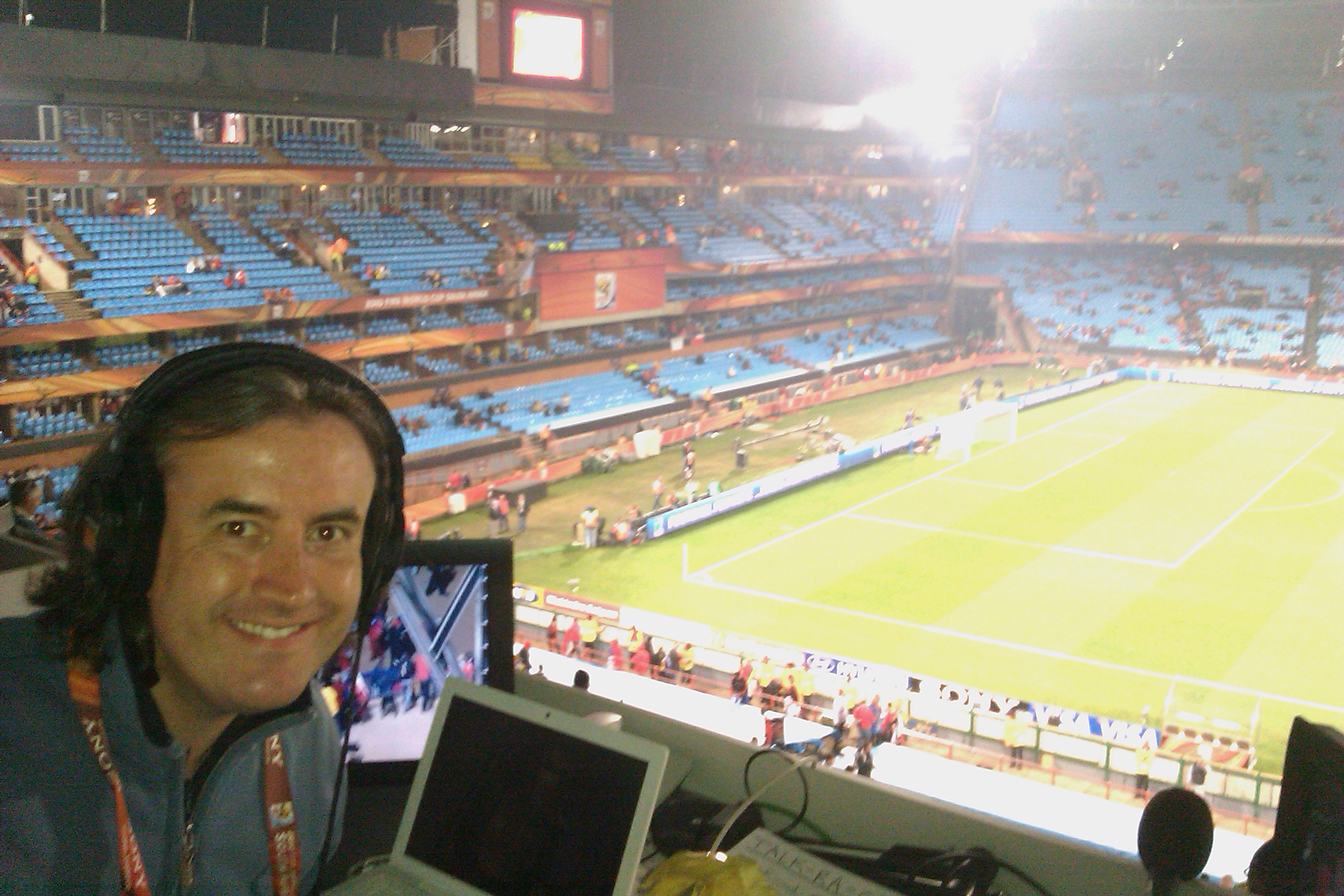 Commentators and reporters all have different methods by which they put together reports or approach games they work on. One aspect that I'm asked about a lot is whether I 'write' specific lines of commentary to suit a goalscorer or a match-winning player.

Well, I'll be honest and say I don't - most times I wait for my brain to inspire me, and it did during last night's game in Rustenburg between Japan and Denmark. Keisuke Honda had fired Japan ahead with a quite stunning free kick, and of course with a name like his, phrases like 'good engine' and 'motors past defenders' are all too easy to trot out.

My notes showed that Japan had never made it out of the group stage of a World Cup on foreign soil and, seeing as they were well on their way to doing that I suddenly came out with "Honda is helping Japan dream the impossible dream". Not bad I thought, although it is one for the advert anoraks out there. Alvin claimed he 'got' it, but I think he's an evil liar.

The weather never ever ever ever ever changes in these parts. Sunny, clear blue skies, barely a breath of wind and pleasantly mild - it's like Groundhog Day - it's all you can do to eat different breakfast cereals to liven it up a bit, as thereafter it's the trip to the gym, followed by homework and then off to a game - although the gym was the scene for my humiliation this morning, as I feebly struggled with the lightest possible weightlifting bars for 10 minutes, only for a petite blonde woman to breeze past me, grab the bar that was 5 times the weight of mine and proceed to do 3 reps of 10. Sickening. I felt like saying "I have broken my elbow of course, love" but what's the point - too much of a silly protest to make, so exit stage left instead.

We had a good laugh at Italy going out yesterday, easily the worst side ever assembled to defend a World Cup, but it wasn't funny watching the antics of their striker feigning injury in the goal net after claiming he'd had a left hook from Slovakia's goalie, when in reality it was a light flick of the fingers. I have many friends (and bandmates) who pronounce football as a 'poofs game full of tarts and cheats' and watching garbage like that, you can't argue with them...but you still argue with them anyway, just because you can. And if it came to blows, I'd be the first to fall to ground clutching my face and rolling around like a Weeble :o)

Sitting here at Loftus Versfeld in Pretoria after Spain and Chile both progressed tonight in Group H, a game spoiled by a referee who clearly loves himself and wanted all the attention, sending off a Chilean player (rightly as it turned out) but generally poncing about and blowing his whistle more than a student high on narcotics at a rave. Hope we don't see Mr Rodriguez of Mexico again, but I fear FIFA will have seen his performance as 'textbook', so he'll get the final probably. You wait and see.

Sydney our driver will be outside the stadium ready to take us back to base, with his 4 phones on standby - I have never seen a man drive and use as many mobile phones as this bloke. Whenever he answers it sounds like he's in a rather bad mood, but then maybe that's the accent. He does have a Coldplay ringtone which would anger quite a few who heard it, but thankfully despite this juggling variety act he performs at 60mph, he is astonishingly a very good driver. But I'm not falling asleep on the way back, that's for sure...