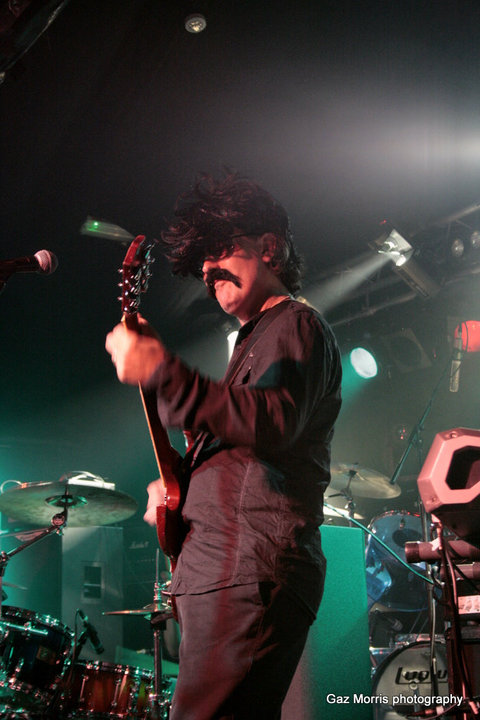 Sometimes as a musician, the planets seem to line up and an evening unfolds that delivers everything one could possibly wish for in terms of atmosphere, nostalgia, emotion and entertainment. Friday night for me ticked every single box and a load more besides.

It seemed that the entire Birmingham Rock Mafia was out in 'force' (in-joke for the chosen few there) at The Asylum to see local heroes Cryer play their first show in 28 years, along with support from Ian The Goat Sings Black Sabbath and Totally Suspect - all in memory of Stu Clarke, former Cryer guitarist who, as I mentioned in my last blog, passed away almost a year ago due to complications arising from his diabetes.

The Diabetes UK charity was to benefit from proceeds raised through ticket sales, and whilst plugging of the show had been intense on facebook and in the guitar shop PMT run by Garry Chapman, Cryer's other guitarist, all were a bit unsure as to how many faces would show up...especially with another recently reformed 80's rock act from Brum, Jameson Raid, also playing elsewhere in the city that night.

We needn't have worried. I have never seen The Asylum so busy for a gig night in its (albeit) short history as a music venue in the city centre. Faces I hadn't seen in so long were in attendance. Black Sabbath keyboard player Geoff Nicholls was there, as was Quartz' brilliant guitarist Mickey Hopkins with whom I used to work during my time at Laney Amps in the late 90's. Big Mick, Metallica's long-time soundman, and the bloke who Led Zep trusted to handle their sound for that night at the O2 was also there - as well as countless old friends from my time at Musical Exchanges (where Stu also worked for many years) and bandmates and associates who all arrived for a trip down memory lane.

Of course, such evenings can fall flat if the reality doesn't live up to the memory. Any such lingering doubts were instantly dispelled when Totally Suspect started the evening off. Lead singer Utan still possesses a fine, piercing yet bluesy voice, with a terrific rhythm section behind him, and whilst they didn't play the seminal "You're A C*nt, Your Mate's A C*nt, Infact You're All C*nts" (inspired by a brave roadies parting shot at a load of squaddies when Suspect were being kicked out of a naval base they'd played) they still got everyone singing along with "Your Feet's Too Big" and reminded us all just how great the rock scene was in Brum back in those halcyon days of the 70's and 80's.

Then it was my turn to switch from the host of the evening to the almost impossible job of re-creating Stu's role as Tony Iommi in Ian The Goat Sings Black Sabbath. I've played the role of guitarist onstage a few times in my life and it's usually been in terrifying, last-minute, we're-in-the-shit-can-you-help-us-out-mate situations. Like the time I played at short notice with Dizzy Lizzy at The Railway, and encountered a drummer who thought he was in The Ramones not Thin Lizzy and seemingly felt duty bound to scamper through the setlist at breakneck speed. Still, my leather trousers looked the part that night.

I'd had one rehearsal with Goat, Gaz and Tim in readiness for our half-hour set, and it went down a storm, even allowing for the odd fumble-fingers Les Dawson moment for yours truly. Thanks go to my old mucker Phil Docker for the use of his amp and to Stu Clarke's brother Alan for graciously allowing me to use one of Stu's old Gibson SG guitars (as seen in above photo). I had a great time up there, and did my best not only to play like Stu (which is a physical impossibility in itself) but also to talk like him and BE like him as the pantomime unfolded between me and Goatie as Ozzy.

It was truly humbling, therefore, to have Alan come straight up to me afterwards and say "I really thought it WAS Stu up there, Dants. You did him proud - thank you". I heard similar comments from other friends during the night, but to hear that from Stu's own brother was very touching. It meant a lot to me to do justice to Stu and just how much fun he brought to the band and the show.

Then it was time for Cryer to come on. Graham, Garry, Fez, Pete & Roger were joined by Huey Lucas playing Stu's role on guitar, and I have to say first off that Huey made the impossible possible and played Stu's old parts quite brilliantly. An amazing player in his own right - Def Leppard made a huge error not taking him - Huey was the perfect man to take Stu's place as Cryer played a note-perfect set of great 80's rock that almost saw them hit the big time back in the day.

It was funny to see Garry Chapman playing guitar for the whole gig. Usually as shop manager of Musical Exchanges, he'd never have an axe in his hand for any more than 10 seconds max before handing it over to a customer (!) so to see him wrestling with his Parker Fly guitar for over an hour (with said guitar almost under his chin it was so high up on his strap) was a real treat for me and all the MX staff who were there too.

A brilliant show rounded off superbly with a video tribute to Stu, with pictures from his time in Cryer, Force and other bands being shown on the plasma screens around The Asylum. It was a true lump in the throat moment for everyone remembering the good old days of Barberella's, The 49'ers and The Old Railway, venues that like Stu are sadly no longer with us. Those days will never return to Birmingham - days where bands had a plethora of great places to play in the city and no shortage of fans who wanted to see them.

But if it cannot return, at least with nights like this we can safely say that the spirit of Stu Clarke was re-created for all to enjoy just for a few hours. And this isn't rose-tinted-spectacles from me. The music scene WAS far far better 30 years ago round here - if bands like Cryer, Jameson Raid, Briar, Starfighters etc etc had the access to myspace, facebook etc back then, with all the marketing savvy these bands had, Birmingham would have been home to more star names to rank alongside Tony Iommi, Robert Plant & Rob Halford. As it is, we just had nostalgia on a different scale. But it was no less enjoyable for all that on Friday.

Nice blog mate. Gutted I missed that, the perils of living in sleepy little Pembrokeshire is that you find out about these things after the event! Stu was a real character and a good guy and those exchanges days were some of the best.

Ian mate a great blog that truly sums up the essenance of the night. It was great to see and speak to so many old faces and a tribute to the memory of Stu Clarke who will be sadly missed by all that knew him. I asked a few people to come and every one who could turned out including nearly all of Quartz ie Mick, Malc, Dek, Geoff and Dave Garner plus their road crew Bobby Cool and Shades. Unfortunately Taffy couldn't come as he has retired to Weymouth area. The venue was great for the evening being a good size, two bars, outside chilling area to talk and smoke and fit birds in nurses uniforms pulling pints and dancing on the bar. The sound and light show was brillant (nice one Tim Farrell) as were the three acts.....just perfect No hint of any trouble and friendly and relaxed security with no rush for you to vacate the premises once the bands had finished. The show was filmed and recorded so hopefully that will see the light of day in the not too distant future. Cryer are talking about doing a couple of more gigs possibly xmas and Feb time so that's something to look forawrd to and won't clash with The Raid playing on the same night.....how weird was that!!!

Till the next time

CRYER are doing it again!! A Reuinion at The Asylum on FRIDAY 10th December 2010. Tickets are on sale now on the web and more details to be posted as and when known. Alternatively you can ask GARRY at PMT(Birmingham). This time they want to recreate the "atmosphere" of BOGARTS from that late 70's early 80's era. So I don't know whether Garry knows a scaffolding company or will be importing beer soaked carpet that you stick to whilst watching the band and I remember you literally had to physically peel your soles off the floor if you needed to go back up the bar for a top up. But it was worth it as you could have a quick chat with Tony Iommi who had quietly sneaked in unnoticed to watch QUARTZ if they were playing there.