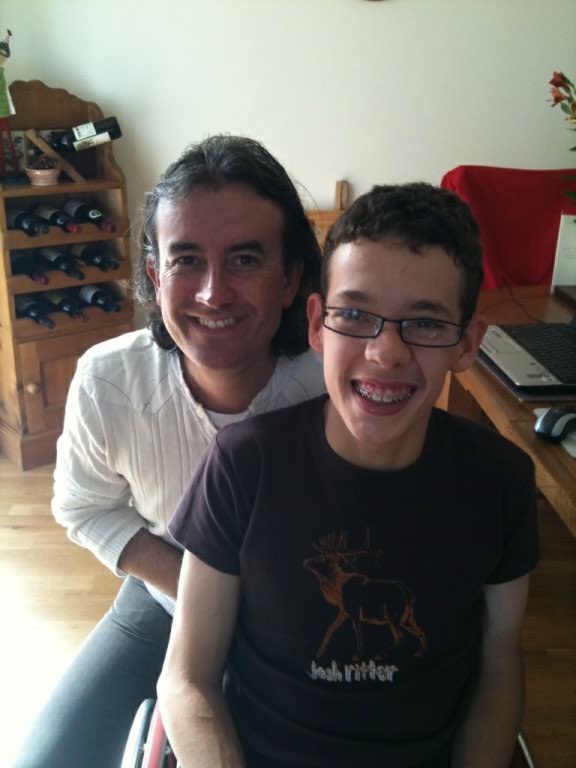 It's amazing how your pre-conceptions about a person or a situation can be so wide of the mark as to be laughable, and shows you up for how narrow-minded you can be at times.

I met David Watkins at his house near Leamington the other day. David is just like hundreds of thousands of 11-year-old boys...he eats, sleeps and breathes football (Cardiff City being his 1st love), will talk with anyone about the beautiful game until it's way past his bedtime and harbours a desire to become a sports journalist/broadcaster when he's older.

The thing is, David has cerebral palsy and is confined to a wheelchair.

A friend of my wife contacted her recently to tell her about David and his love for football and his love for talkSPORT. She asked Natalie to ask me if I would be willing to go and meet David at his house and give him an insight as to what it's like working on the radio and to give him any tips about how to get into such a career.

This presented two problems to my mind immediately - firstly, the way I got into radio was by no means traditional or 'textbook' as Partridge might say, and so my advice about getting a break would be as much guesswork as anything else. Secondly, how can a young lad with a profound disablilty hope to be treated equally in chasing such a dream job?

It was undoubtedly wrong of me to think that way, but it's an unfortunate by-product of the way able-bodied souls view those with a handicap - it's seemingly drip-fed into us from a very early age that there simply has to be something 'different' about disabled people that procludes them from contributing to regular society. How misguided is that?

Thankfully, those prejudices and pre-conceptions were washed away the very instant that David offered his hand to me as I entered the kitchen in his Mum Diane's house where he was sat tapping enthusiastically into his laptop. Within seconds, he was grilling me on the merits of Roy Hodgson's appointment at Liverpool and the effect Craig Bellamy's arrival at the Cardiff City Stadium would have on the Bluebirds' automatic promotion hopes.

In short, the hour or so I spent in David's company were an absolute delight. He showed more insight than many a grown-up sports journalist is capable of, and proved beyond all reasonable doubt that he could carve out a career in sports journalism. Here's hoping that, as he gets older, those whom he needs to impress in sports media can shed their pre-conceptions about the disabled and what they can and cannot achieve - David deserves a chance to shine...I sincerely hope he gets one. I drove home from his feeling both elated that I'd met such an intelligent young man, as well as being disappointed in myself that I'd expected anything else from meeting him. David, I look forward to filling your autograph book with as many talkSPORT names as I can muster when I'm down in London this coming Friday, Saturday, Sunday & Monday...I'll even get the Moose's if you think it's worth it (kidding Moose)

Thankfully for Dressed To Kill, our latest gigging weekend did not present us with venues that lacked stages, nor spontaneously combusting band members, or wireless systems that picked up A2B taxis rather than Danny's guitar sound.

We headed North & East to firstly play at The Yardbirds club in Danny's home town of Grimsby and follow that by heading to Nottinghamshire to appear at The Diamond in Sutton-in-Ashfield. Grimsby had seemingly already shut for the day when our transit van reached the end of the M180 and headed for the town centre. Any KISS fans reading this will know what I mean when I say that the 'Lick It Up' video could easily have been shot in Grimsby...better still, imagine those scenes in 28 Days Later when that bloke is walking through a deserted London. That's Grimsby - one of many examples of a port town rendered ghost-like by the demise of the shipping/fishing industry.

I remember travelling as a cub reporter up to Grimsby one day to commentate on Walsall’s trip to Blundell Park for Capital Gold back in the day (at a guess, 2000) on the most miserable day of weather. Indeed the squally rain showers that kept on coming even gave way to a mini-tornado during the second half. This Grimsby twister began to violently shake the electronic scoreboard housed directly above the 4 Walsall fans (I’m not kidding) who’d made the trip. How it stayed up I will never know – Walsall didn’t.

Anyway back to the rain soaked streets of present-day Grimsby yet...not only did we attract a full house of wildly enthusiastic punters at the Yardbirds club, but we also found the only open kebab shop in Lincolnshire after a long walk through the streets once we'd finished playing. Hard to say which of those was the more impressive feat. Pizza with kebab meat on it? Trust me, it's the future - tastes far better than it sounds. But then when you've played for 2 hours non-stop, a scabby horse on the menu would have looked rather appealing. Of course kebab meat is lamb predominantly...isn't it?

I'm constantly staggered at the lengths people go to when they're coming to see Dressed To Kill - there were a few folk who turned up in full make up (2 Peters, a Paul and a Gene by my recollection) and sang their hearts out from beginning to end. And people wonder why I appear to be smiling all the time when I'm behind the drums...it’s not wind.

Sutton in Ashfield’s Diamond Club has been a regular DTK haunt for a decade now, and our evenings there always follow the same pattern – we arrive to hear on the van’s radio Birmingham City have just lost, load the gear inside onto a tiny stage and wonder how we fit all our equipment on it, meet owner Gary who launches into his Tommy Cooper impression on seeing me, soundcheck with some truly obscure KISS songs, cram ourselves into a dressing room that would comfortably accommodate a small colony of ants, dress up and then play a 2 hour show to the most enthusiastic audience you can imagine.

You told me garlic bread was the future.