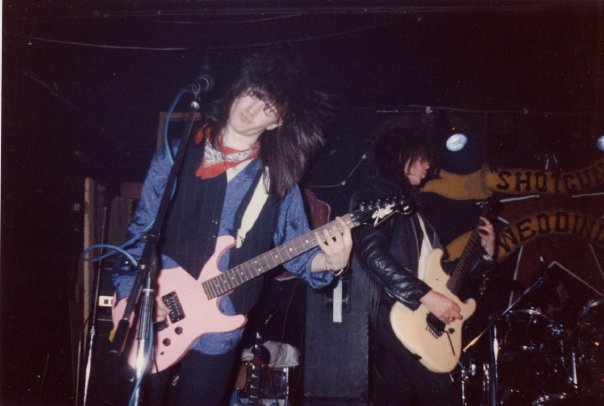 PLENTY OF YOU HAVE EMAILED TO ASK IF I HAVE ANY FUNNY 'ROAD' STORIES FROM MY YEARS AS A MUSO OF NO FIXED ABILITY...I HAVE ONE OR TWO ;o)

SO HERE'S ONE LITTLE TALE FROM MY EARLY DAYS OF TRYING TO ACHIEVE ROCK STARDOM...IF YOU LIKE IT, LET ME KNOW BY WAY OF A COMMENT BELOW AND I'LL DREDGE UP SOME MORE EMBARASSING NONSENSE FROM MY PAST LIFE! THERE MIGHT EVEN BE ENOUGH FOR A WHOLE BOOK IF ANYONE CARES!!

JUST TO SET THE SCENE...IT'S 1988, I'M 19 YEARS OF AGE AND RESEMBLE DOUGIE HOWSER MD WITH MY NOT-VERY-ROCK-AND-ROLL HAIRCUT. I POSSESS A LOVELY CHROME DRUM KIT BUT NO BAND TO PLAY IT IN...BUT THINGS WERE AFOOT IN MY LOCAL...

One night in the Saddlers (inevitably) led to my next attempt to get on to the first rung of the rock and roll ladder. My friend Phil Docker introduced me to a guitarist called Graham (or Gray for short) who had a local sleaze-rock band called Shotgun Wedding. They were all set to play in a ‘battle of the bands’ competition at the General Wolfe in Coventry that weekend, and would I be available to roadie for the band? It seemed the band onstage before Graham’s had a left-handed drummer and I’d be needed to quickly switch the kit back to right-handed use for Shotgun’s drummer John. Piece of piss and a chance to get pissed too, I thought, so I happily accepted.

Battle of the Bands contests are without doubt the most useless method ever devised in helping the cream of rock talent rise to the top. They simply serve as a contest in who can bring the most vociferous punters to sway the judges’ votes. Absolute bollocks and I’m honoured to say I’ve never partaken in such a sham…at least not directly.

I’d heard of Shotgun Wedding before. As my confidence in myself socially speaking began to climb, I started venturing to Birmingham’s best rock club on Saturday nights – Edwards No. 8 was a huge building that housed 3 separate floors which catered for all tastes – the bottom floor was exclusively for prog and classic 70’s rock; the top floor kept the punks, Goths and new-waver’s happy; but the middle floor was where it was at for me – the place for all the current rock and Glam metal stuff, from Bon Jovi & Motley Crue, through obscure Glam acts like Britny Fox and Dokken and onto the emerging thrash and power metal bands like Anthrax & Metallica.

Anyway Edwards also hosted band nights throughout the rest of the week and I’d seen Shotgun’s name before on a flyer advertising a Battle of the Bands night on a Monday. So it was clear that this band were either convinced of the format’s route to stardom or just desperate for a gig somewhere, seeing as they were about to have another go at it in Coventry.

The band had booked a coach to bring the requisite rent-a-mob along to the event, and Phil & I took our seats on the coach knowing we’d have to set to work as soon as we arrived. I was quite excited for the band actually – upon meeting the rest of them they all really looked the part. Singer Ant was a tall, lanky fellow with the snake hips and bee-sting lips that made him look rather like his hero David Johanssen from New York Dolls, Gray and Dave looked like twin brothers on guitar, but that was because their hair was teased so improbably high and wide you couldn’t make out facial features for all the Silvikrin.

John the drummer was stripped to the waist and a bundle of nervous energy as I met him before going to the stage to re-set the kit for him and within 2 minutes he’d taught me how to twiddle my drumsticks, which is not a euphemism for anything else. He told me how he wanted the kit set and I happily went off to do his bidding.

I was only halfway through switching things around for him, when John appeared at the side of the stage looking anxiously at me. “What’s up?” I asked as he edged closer toward me

“Erm…well it’s just that…would you mind doing something for me during the show?”

John then produced said cowbell from behind his back, attached in rudimentary fashion with good old gaffa tape (the musicians best friend) onto the sort of flimsy music stand that was more used to taking the weight of Let’s Play Recorder book 1. To be honest, things hadn’t been thought through here.

“But the stand’ll just collapse won’t it John?”

“No, not if you hold it at the bottom - we tried it in rehearsal last night.”

“Just lie on your front down here to my left and keep your hands on the stand’s legs and it won’t go anywhere.”

“Right…and which song do you use it in?”

And so as, Ant, Gray, Dave, bassist Paul and John took to the stage I was prone and face down on the somewhat unpleasant fag-ash-strewn surroundings of the drum riser holding onto the flimsiest cowbell stand in Christendom for dear life, praying that the first blow received wouldn’t result in clanking catastrophe. I waited as “Hot Pants”, the barnstorming opener (sample lyric ‘Hot Pants, made to fit; Hot Pants, tight ain’t it?’) was duly launched into at furious pace and glanced up at John as he played.

Bloody hell, he was hitting them hard – seeming to prefer a small leap off the stool each time he stomped on the bass drum pedal to give him – well - extra leverage, I suppose. His crash cymbals were a little smaller than my own in diameter. I say ‘little’, but I mean ‘half the size’. This I later learned was down to the force with which he’d hit these cymbals from the day he acquired them, leading to cracks appearing at the edge. This necessitated his brother to take them to the factory where he worked so that he could lathe the cracks away. This led to his crash cymbals looking more like the sorts of things toy clockwork monkeys clink together.

But that wasn’t foremost in my mind as I remained horizontal in Coventry. 10 minutes into the set and not one solitary thwack on the holy cowbell of Antioch. Inbetween “I Can’t Forget You’ and ‘Wise Up’ in mid-set, Phil, who was on the other side of the stage appeared to mouth the words “Turn Dave off” as he pointed at Dave’s amp to my immediate right. Strange, I thought; Dave wasn’t miming was he? Shotgun Wedding in backing tapes scandal? Whatever, I risked all by releasing my grip on the sodding stand for 10 seconds and reached up to turn Dave’s rented Marshall amp to the ‘off’ position.

Job duly done I turned to resume my job as chief cowbell stand holder and looked back across at Phil who was now waving frantically at me, pointing his index finger skyward and mouthing, more clearly than before, “No! No! Turn Dave UP!!!” Dave meantime, bless him, was staring down at his blue Fender HM Strat wondering where the noise coming out of it had disappeared to, whilst I scrambled back to my feet and undid my mistake, tweaking the master volume up to 11 as I did so.

Unfortunately, John chose this moment to launch his first (and only) assault on the poor defenceless cowbell as he started the intro to “Good Time”. It must’ve been a hoot to look up from the audience – and there were a good few in I can tell you – and see a geeky Glen Medieros lookalike in a KISS T-shirt dive behind the drum kit like Peter Shilton in his prime to save the cowbell from being twatted into the next street. Too late, the stand’s resistance was quite literally crushed by hit No. 5 applied by John’s monster of a stick and that was that. My first job as a roadie and I couldn’t’ even perform the simple task of protecting the drummers favourite percussion accessory. Thankfully John didn’t twat me with the same force afterwards backstage – he was quite good-natured about it really…and to this day, I think Dave still believes his amp had a temporary malfunction.

Gig duly performed, the band dried themselves off in the cavernous dressing room upstairs before returning to the live room for the judging results, crossing fingers and toes that the first prize of a recording session at a local studio could be theirs. And they stood as good a chance as any based purely on audience reaction, as they’d been comatose for all 4 entrants throughout really.

To only win the accolade of ‘best backdrop’ was therefore a bit of a letdown, as was the trophy that accompanied said award. It resembled the sort of thing you’d hand out at the Olton Ravens under-8 side's end of season dinner to the most improved 7-yr-old defender. Spartan is the word that springs to mind. And whilst the black cloth they used to display the band’s logo was huge, with a sheriff’s star in the middle adorned with the name in ‘rodeo’ style lettering, the star was flanked on either side by 2 ‘roses’, which more resembled rancid red cabbages than flowers. Size does matter sometimes then.

I can’t remember who won 1st prize, and nor do I care. They probably got no further than I ever did, as that is what befalls every single Battle Of The Bands winner in history. Styled by their mums, supported by aunties and cousins, yet devoid of talent. Something in Shotgun Wedding, though, sounded promising. Little was I to know that I’d be involved with them within 2 months of that night....

Loved it. The mental image of you stage-diving to save the cowbell from crashing to the floor may have me laughing for a while.

Sorry about the Cowbell Ian,

Reading this brings back so many memories! Some of them great!

We had some really good times and I think you would agree, not only in SGW, but also New Jersey!

Happy days hey my friend !, Keep the stories coming in only the way you can do !!

Have you any good ones of NJ, or had we grown up to much by then !

No need to apologise John - if I'd been where I was meant to be, that cowbell would've stayed put!! :o))

New Jersey stories, eh? I shall have a think....

Reading during my lunch break is much better idea than before work, although I'll have to be careful not to guffaw out loud.
More of these please!!!